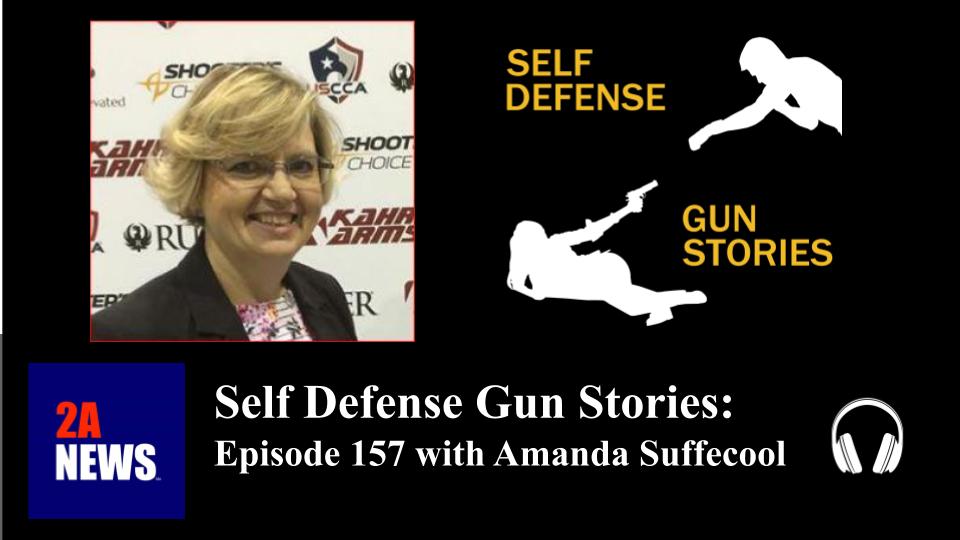 I’m glad you found us and welcome to episode 157 of Self-Defense Gun Stories. This podcast is for people who are curious about self-defense, and for those who are already trained. I’m your host, Rob Morse. We’re joined this week by self-defense instructor Amanda Suffecool.

Amanda- Hi, Rob.  I’ve been instructing,learning, have a new cerakote rifle for fun, completed a fashion show in Ohio and am planning 3 more for this year.

Rob- We’re up to 70 ratings and 44 comments on iTunes. Please go to the iTunes store where you subscribe to podcasts and give us a rating and leave a comment.

I’m looking for an audio editor for the spanish version of Self-Defense Gun Stories. If you know someone, then please ask them to contact us.  Until then, Amanda, please introduce our podcast to our new listeners.

Amanda- We’ll talk about recent examples where gun owners were in a life threatening situation. Were they lucky, or did they prepare ahead of time? What should we do if we were in their place? We give you the links back to the original news article in our show notes.  Our first story took place last week in Warren, Ohio – Which is in my own back yard. .

You’re working the night shift at a fast food restaurant. It is after midnight so the front doors are closed and people receive their food through the drive through window. You see someone climb through the drive through window, and the intruder has a gun in his hands. You draw your firearm and fire. The intruder runs away and you call the police. The incident was captured on surveillance video.

Amanda- being armed saved her, and may have saved her life. Her firearm was accessible, rather than back in her locker or backpack where she changed into her work uniform.

She was attacked outside the home late at night. That is where criminals prowel.

There is a tendency to deny that we’re seeing something unusual. She recognized the threat and acted.

Rob- What would you like us to do in this situation?

Amanda- Do you and your co-workers have a plan? Does your workplace allow armed employees?  Are the doors locked all the time? What do you do if someone opens the back door to take out the trash late at night? Is there an armed defender at the door to protect them and keep a criminal from entering the building? Or are you so comfortable at work that you don’t even have a lookout?  What do you do and say to alert your co-workers, to protect them, and to get help on the way? Do you run out the front door, or do you hide in the freezer with your gun pointed at the door?

Amanda- That is enough for now. Our second story happened last week in Martinsville, Virginia

It is 9:30 at night and you’re filling your car at a gas station. You get back in your car when two men walk by. They put a gun in your face and demand your money and keys. You have your Virginia concealed carry license. You’re armed. You undo your seat belt and present your firearm. You shoot the attacker nearest to you. Both of your attackers run away, firing as they run. You call the police.

One of your attackers was taken to the hospital for gunshot wounds. Police charged your attackers with Attempted Robbery, Armed Robbery, Shooting into an Occupied Vehicle, Shooting into an Occupied Building, Use of a firearm in Committing a Felony, Reckless Handling of a Firearm, Felony Damaging Property, Discharging a Firearm in Public, Possession of a Firearm by a Convicted Felon, Possess Firearm Under Age, and Conspiracy to Commit a Felony.

Amanda- First I want to say… they were tough on crime with all those charges.  But think about it – she needed her defensive tools where she could use them immediately. She didn’t have time to wait for the police, or to get her gun from the trunk of the car, or from a purse or backpack in the back seat.

Rob- Is this an unusual situation?

Amanda- night time. As your getting ready to leave a gas station so your attention is shifting from outside the car to the road in front of you.

Rob- She needed her tools, but did she have to draw immediately?

Amanda- Night time works both ways. Hand them your purse and shoot as they reach for it. You want to avoid a gunfight where they shoot at you as you shoot at them.

Rob- That is important. When do you talk about this sort of situation with your students?

Amanda-  Distract,  toss the purse in a direction that takes their eyes from you.

Rob- When do students learn to present a firearm from a holster?

Amanda-  Not in the basic class, and not in most classes in most states for a Concealed Carry license. Students need to be students of the gun, Test those skills, expand them, train, train, train.

You’re cleaning your home when you hear a noise from the back of the house. It is three in the afternoon and you heard glass breaking. You run to your bedroom and get your gun. You hide in a back closet and call police. You shoot your attacker when he opens the closet door.

Rob- Does this sort of crime happen very often? I thought we were safe in our homes during the day?

Amanda- Most criminals attack our homes during the day because they think we’re at work. This criminal didn’t care is someone was at home or not. That is scary.

Rob- What would you like us to do when we’re at home cleaning the house?

Amanda- Please have your gun on you. Our defender was lucky. The intruder could have broken into the house while the homeowner was at one end of the house and her defensive tool was at the other end of the house. You gun doesn’t do you a lot of good if you have to fight past your intruder to get to it. That means you have to have a holster. If you’re going to go that far, then go ahead and get your carry permit so you can be armed all the time.

Rob- Good point. Anything else.

Amanda- The story doesn’t say if the robber ran away or not. I like it that the homeowner didn’t chase the robber. Both before or after the actual defensive event.   In the first place – she called the police. If they were there in time – no one had to get shot. If not – well she was prepared. And then after – she stayed put.   Lesson to all: If they are running away, then let them go.

Rob- Fourth story- Are you armed as you stop for gas?

You and your friend stopped for gas and a soft drink at the convenience store. You notice a police car slowly roll through the parking lot. The female officer is slumped over and the passenger has a gun pointed at her. The car slowly leaves the parking lot. You and your friend follow the police car as it weaves down the highway between the shoulder and the slow lane.

You’re worried about the officer. You call 911. You have your concealed carry license. You’re armed. Your friend drives your truck alongside the patrol car, and shouts for them to stop. You and your friend pull the passenger from the patrol car. You hold the handcuffed suspect on the ground at gunpoint until police arrive. The officer is evacuated by helicopter. Four days after her attack, the officer was listed in stable condition but unable to speak after having four surgeries on her abdomen. The inmate was treated for a gunshot wound to the hand.

Amanda- Wow. You see something. You call 911. 911 asks you to stay on the line and follow the police car, if you can. You decide to stop the car and save the wounded officer. You can’t do that with your bare hands. I’m so glad they were armed and willing to act.

They were not head down, with all their attention on their cell phone. They were looking around as they stopped for gas.  Head on a swivel as they say. And it probably / possibly saved this officers life.

Teamwork. One person drove and the other used a gun. Several citizens held the inmate until more police arrived.

It is hard to hold someone hostage. No shots fired by the defenders in this case. Your finger stays off the trigger until you’re on target and have made the decision to fire.

Rob- Do police use those same safety rules?

Amanda- The police, private security personnel, and most of the military use the same safety rules we do.

Treat as loaded
Point it in the safest direction.
Put your finger on the trigger when you’ve made the decision to fire and your sights are on the target.
Know what is in front of and behind your target.

Exit-  Rob- that wraps up this episode. Amanda, thank you for helping us again. Where can we learn more about you?

Amanda- You can find me at eye on the target radio radio. I have a nationally syndicated radio show. You can call in and talk with us Sunday nights from 5 to 7 eastern time. I also instruct on the weekends.

Rob- After you give Amanda a listen, then leave us a message on the podcast facebook page.

Amanda- We share this podcast with you for free.  Please share the podcast with a friend and give us a rating on I-Tunes and Stitcher. We’re also available on Google Play Music,Tunein, Spotify, and iHeart Radio.

Rob- This podcast is part of the Self-defense radio network. Find more great shows like Eye on the Target Radio at sdrn.us