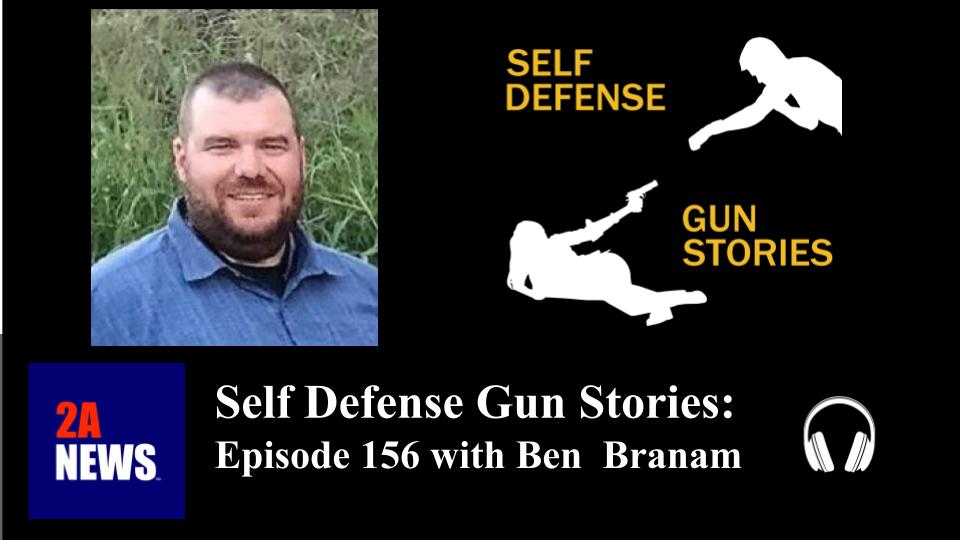 I’m glad you found us and welcome to episode 156 of Self-Defense Gun Stories. This podcast is for people who are curious about self-defense, and for those who are already trained. I’m your host, Rob Morse. We’re joined this week by self-defense instructor Ben Branam.

Ben- Hi, Rob.  I’ve been working and shooting and…

Rob- We’re up to 44 comments and 70 ratings on iTunes. Please go to the iTunes store where you subscribe to podcasts and give us a rating and leave a comment.

I’m looking for an audio editor for the spanish version of Self-Defense Gun Stories. If you know someone, then please ask them to contact us.  Until then, Ben, please introduce our podcast to our new listeners.

Ben- We’ll talk about recent examples where gun owners were in a life threatening situation. Were they lucky, or did they have a plan? What should we do if we were in their place? We give you the links back to the original news article in our show notes.  Our first story took place last week near New Orleans, Louisiana.

You’re working in your brother’s convenience store. It is 8 in the morning when a customer comes in wearing a black hoodie with a red shirt pulled over his head. That doesn’t look right. You’re armed, and so is your brother. You look for him, but your brother is in the back room. You step to the side and put your hand near your gun. The customer has a gun in his hand, and now the gun is pointed at you. You’re being robbed at gunpoint. You give the robber the money from the till. There are other customers in the store, and the robber still has his gun out.

You shoot the robber, and now he runs away. You and your brother call police.

Ben- other people at risk

Ben- video cameras. Red shirt over his face and neck. Shot in the middle of the red shirt, so perhaps the defender had trained.

Ben- That is enough for now. Our second story happened last week in Basile, Louisiana.

You are asleep, but you thought you heard something. Was that someone in the house. You hear in again, and then see a light turn on down the hall. You’re living alone..except for the intruder who is in your house. You get your gun and stand at your bedroom doorway. The intruder steps into the hall and you shoot him. Now he runs away. You hear shouting outside. You go back to your bedroom and call police. A sheriff’s deputy who lives in the neighborhood has already captured three of the four suspects. One is taken to the hospital for gunshot wounds on his arm and leg.

Ben- did not chase the bad guys.

Ben- get your gun, lock your door. Call police, keep your sights on the door. Our third story happened last week near Charlotte, North Carolina.

You own an auto repair and paint shop. It is almost closing time and people are coming in to pick up their cars for the day. You hear gunshots outside. A second later, the glass on the front of your building shatters and your hear more gunshots. You step into your office and grab a shotgun you keep there. As you come back out of your office you see a man with a gun enter your store with a gun in his hand. He is pointing the gun at your employees and your customers. You shoot the attacker in the face and neck. Now your attacker runs away. You call 911 and ask for police and EMTs.

The attacker was an angry customer who was threatening your family. You had a restraining order out against him. He is charged with six counts of assault with a deadly weapon with intent to kill, one count of shooting into occupied property, and possession of a firearm by a felon.

Ben- Saw a threat and defended the innocent

Ben- Took out a restraining order.

Ben- A gun in your pocket is worth three shotguns in your office.

Rob- Fourth story- Are you armed as you get out of your car?

It isn’t easy, but you’re walking back to your car. You have a handicapped placard, but there wasn’t a handicapped parking place near the door of the police station. A man approaches you and shouts that you’re not handicapped. You tell him to go away. A second later he’s back and swinging a metal bar at your head. You put up a hand to defend yourself.

You have your Wisconsin concealed carry permit. You are armed. You grab your gun from your purse and shoot your attacker.

You’re screaming for help. A man runs up and points a gun at you. The stranger says he’s with the FBI and to drop the gun. You spread your fingers and your gun falls to the ground. The stranger pushes you onto the ground and handcuffs you.

Witnesses say you’re the victim. You’re uncuffed and your attacker is charged.

Ben- glad she was armed.

Ben- glad she defended herself with her arm, and then used her gun to defend herself.

Ben- hard to purse carry. Try it with a partner and an empty gun.

Ben- You will be cuffed. Keep your cool. Stay polite. Ask for a drink because your mouth will be too dry to talk. Say you’ll cooperate. Ask to speak to your lawyer.

Exit-  Rob- that wraps up this episode. Ben, thank you for helping us again. Where can we learn more about you?

Ben- Look for me at Modern Self Protection.com.  I live in San Antonio, and most of my classes are in central Texas.  I teach armed self-defense and church security. Listeners can see my class schedule at my website, and they can also listen to my weekly podcast Modern Self-Protection.

Rob- After you look at Ben articles and sign up for his podcast, then leave us a message on the Self-Defense Gun Stories facebook page.

Rob- Like Ben’s show, this podcast is part of the Self-defense radio network. Find more great shows at sdrn.us