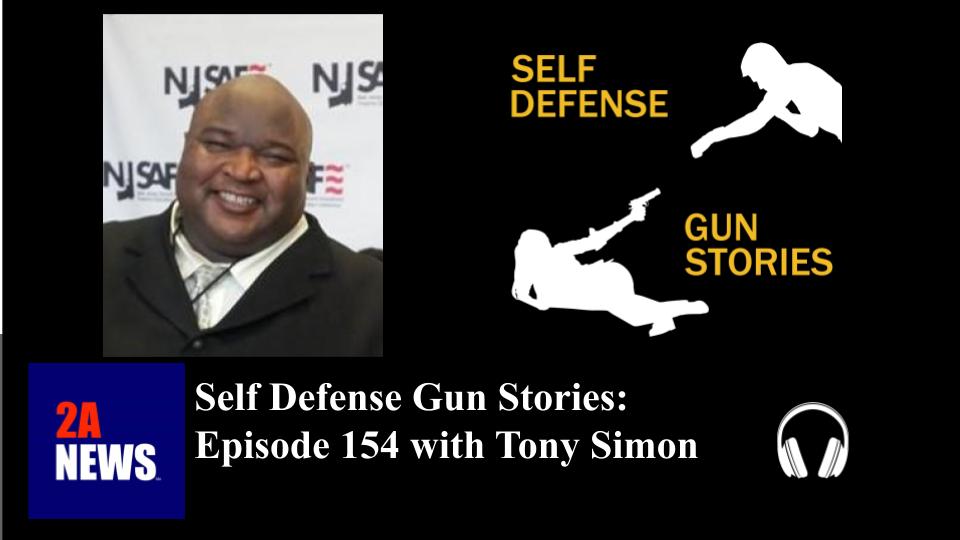 Rob- I’m glad you found us and welcome to episode 154 of Self-Defense Gun Stories. This podcast is for people who are curious about self-defense, and for those who are already trained. I’m your host, Rob Morse. We’re joined this week by self-defense instructor Tony Simon.

Tony- Hi, Rob.  I’ve been taking classes from other instructors. I took a home security seminar during the nra annual meeting in Indianapolis, a fighting carbine class in NJ and a firearm and learning clinic in Missouri. As an instructor I need to keep up on the latest training techniques and training methods. How about you?

Rob- I took a self-defense and trauma class in Texas. This class merged defense and first aid. As defenders, our first clue that  we’re under attack is that someone is hurt. The shooting part was by KR training. Trauma treatment was taught by Lone Star Medical.

In May we received three new comments on iTunes. 65 people gave us a rating. Please go to the iTunes store where you subscribe to podcasts and give us a rating and leave a comment.

I’m still looking for a producer to make a version of the podcast in spanish.

Tony- We’ll talk about recent examples where gun owners were in a life threatening situation. Were they lucky, or did they have a plan? What should we do if we were in their place? We give you the links back to the original news article in our show notes.  Our first story took place last week in Chicago, Illinois.

Rob- First story-  Are you armed as you walk down the street?

You have your Illinois concealed carry license. You’re armed and you’re well trained. You present your gun from its holster and shoot the criminal until he stops shooting at you and your son. You rush your son to your vehicle and hand him to a friend. You check to make sure your son is uninjured. Then you call police while keeping your eyes on the bad guy.

EMTs take your attacker to the hospital. The police ask to see your firearm, your permit, and your FOID card. Your attacker was a convicted felon and gang member. It was illegal for your attacker to have a gun. It appears he was sending threatening video messages to other gangs when he attacked you.

Tony- I trained with this defender.

Rob- You were in a class together?

Tony- Yep. POGO, even at 4 in the afternoon.

Tony- Stay at the scene if possible. Call police immediately. (Staying in place keeps people from stealing the criminals gun!)

Tony- Be professional with the police. You’re having a really bad day. Ask for a drink of water. Don’t say a lot, but do say this. Point out the bad guy, articulate why he was a deadly threat and reiterate that you had to stop him from killing or seriously wounding you.

Rob- When (in what class) do you talk to your students about talking to the police?

Tony- Wait your turn to draw.

Rob- When do you teach drawing from a concealed holster?

Tony- A little in every class.

Rob- what is the benefit of practice?

Tony- automaticity. Part of you goes on autopilot so you can do other things..like watch the bad guy.

Rob- Can you give me an example from this story?

Tony- We’re taught to move as we shoot, but in this case you can’t run away and leave your son behind. Using your firearm has to be enough of a habit that your brain has room to think.

Tony- That is enough for now. Our second story happened last week in Jacksonville, Florida.

It is just after noon when you hear someone knocking on your front door. They are banging away and you go to see who it is. You also see someone trying to get into your house through the back door. That seems suspicious. You walk back to your bedroom and get your gun. You call police. You’re standing in the hallway of your home when the intruder breaks through your front door. A second later the intruder crashes into you. You shoot him. You back up, and the intruder runs away. Now you tell the police that shots were fired.

Tony- I’m glad the homeowner was armed. Two robbers against one. They were probably looking for an empty home by breaking in during the middle of the day.

Rob- This situation went from a knock at the door to body contact in seconds. That doesn’t give you much time to react.

Tony- I ask my students to go armed.

Tony- I’m glad the defender backed up and tried to get to safety. He didn’t chase the bad guys. He was on the phone with the police.

Rob-  What do you do when the police arrive?

Please join and support the Second Amendment Foundation at SAF.org

It is one in the morning and you’re behind the counter at a convenience store. A customer walks in wearing a hoodie and a mask over his face. Then he pulls an 11 inch hatchet from his pants and tells you to give him the money. You back up, draw your firearm. The attacker puts down his hatchet and raises his hands. You call police. The intruder gets up and runs away.

Tony- I don’t want to get in a wrestling match with a man carrying a hatchet. I’m glad our defender had a gun. (watch the vid, tony. The defender never pointed in at the attacker.)

Rob- Is this a lethal threat?

Tony-  It was a lethal weapon and it was used to threaten legal action. The clerk showed good judgment in pulling out his handgun and restraint in using it.

Rob- What do you want our students to do?

Tony- Have your defensive tools with you. That includes a firearm and a phone. In this case, it also included security video. Create distance from your attacker if you can. Keep something between you and your attacker especially if they are armed with a striking weapon.. Like a checkout counter.

You are a woman home alone. It is almost ten in the morning when you hear someone banging on your front door. You don’t recognize him, so you don’t open the door. A minute later you hear someone trying to get in through your back door. You retreat to a back room in the house, get your gun, and hide in a closet. You call police. You’re talking to the police when the intruder opens the closet door. You shoot him several times.

Tony- Great job. She retreated. She armed herself. She went to a safe room. She called police to get help on the way. She defended herself when the felon confronted her. Some people want your things. This criminal followed the sound of her voice and wanted her. The attacker was a career criminal with 12 felony convictions.

Rob- Anyway we could help her do a better job?

Tony- It took awhile for the attacker to enter. Have good locks, a security system and security film on the door windows and fim on the windows next to the door.

Rob- How much would that cost?

Tony-  under a hundred dollars to reinforce your frame and window tinting.

Have a deadbolt lock and reinforced frame on your safe room door.

Rob- What does a solid core door and lock cost?

It might keep you from having to shoot someone before the police arrive.

Rob- Anything else we can learn from her experience?

Tony- Our advice works. Please use it.

Exit- Rob- that wraps up this episode. Tony, thank you for helping us again. Where can we learn more about you?

Tony- Find me at Diversityshoot.com You can find me on Instagram and facebook at Simon Says Train and The 2nd is For Everyone podcast.

Rob- After you look at Tony articles, then please leave us a message on the podcast facebook page.

I’m Rob Morse. We’ll be back next week with more Self-Defense Gun Stories.