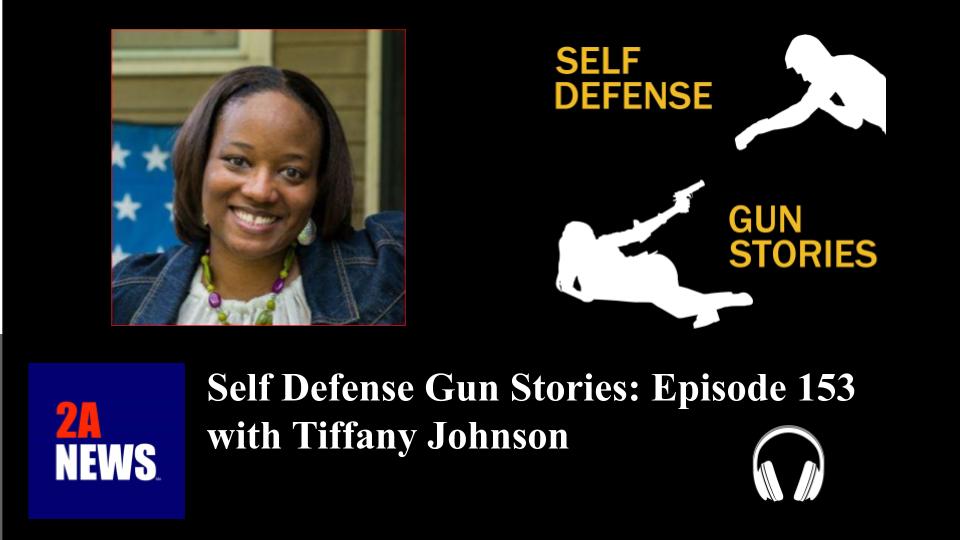 I’m glad you found us and welcome to episode 153 of Self-Defense Gun Stories. This podcast is for people who are curious about self-defense, and for those who are already trained. I’m your host, Rob Morse. We’re joined this week by self-defense instructor Tiffany Johnson.

Tiffany- Hi, Rob.  I’ve been working and shooting. Since we spoke last time-

Rob- A thank you to our listeners since we received another comment on iTunes. Please go to the iTunes store where you subscribe to podcasts and give us a rating and leave a comment.

Tiffany- We’ll talk about recent examples where gun owners were in a life threatening situation. Were they lucky, or did they have a plan? What should we do if we were in their place? We give you the links back to the original news article in our show notes.  Our first story took place last week in Tallahassee, Florida

Rob- First story- Are you armed at home?

You hear strangers enter your home. It is 3 in the morning, and the intruders don’t have to kick in your garage door. That is because your car and your keys were stolen yesterday, and the locksmith didn’t have the new locks yet. You move toward your family and see two strangers standing in your kitchen. You retrieve your rifle and shoot them. They shoot back as they run from your home. Your family is safe, and you call the police.

Police find stolen articles that the armed burglars left behind. They find jewelry and firearms, but those aren’t yours. The police also find one of the burglars at the hospital a few hours later. Then they collect more stolen guns and valuables at the burglar’s house.

Four suspects were arrested on charges including burglary, aggravated assault, attempted felony murder with a firearm, car theft, and possession of weapon by a felon. The youngest suspect was 16 years old.

Tiffany- These are criminals.

Rob- What would you like our students to do if they lose their keys?

Portable alarm (like the ones they use for hotel travelers)

Was only armed after he saw the intruders.

Other family members. Were they armed? Was there a plan to protect them?

Rob- Was this a gunfight?

Tiffany- Contrast armed defense with no shots fired, a shooting, and a gun fight.

Tiffany- That is enough for now. Our second story happened last week in Charleston, South Carolina.

It is four in the afternoon when you hear someone knock at the door of your apartment. You aren’t expecting visitors. You hear voices outside, and the strangers knock again. You have your pistol with you when you open the door. Two strangers push their way inside and knock you down. One of the robbers is carrying a rifle. You present your pistol and shoot the robbers. They run away.

You get up and call the police. The cops find a tail of blood leading away from your door.

Tiffany- I’m glad he was armed before he found out he had a problem. (like wearing a seatbelt before the crash starts)

I’m also glad he didn’t chase the bad guys. He called the police and stayed at the scene.

Rob- What should we do if we get an unexpected knock at the door?

Tiffany- Talk to strangers through the door.

Look through the peephole in the door. If you’re a renter and it isn’t your door, then buy an electronic peephole to put on the wall near your door.

“he opened his door to find two men standing outside, one holding a rifle”

Rob- Criminals want to surprise us. Do you teach students to respond after they’ve been pushed to the ground?

Rob- Third story- Are you armed in public?

You walked out of a gambling hall. You’re almost at your car when a man approaches you. He demands your money. The robber sprays you with pepper spray and hits you in the head. He tries to go through your pockets.

You’re armed. You shoot your attacker several times. Your attacker runs away and you call police. It is hard to use your phone when you’re crying from pepper spray.

The police find your attacker a half mile away and take him to the hospital. It is the middle of the afternoon. You’re 80 years old. Your attacker has a criminal record and is 73 years old.

Tiffany- No safe people, no safe time. No safe place.

“reached for his firearm inside his pocket”

Tiffany- This was a shooting rather than a gunfight.

Rob- Was this a lethal threat?

Tiffany- Incapacitated you to the point that you are not able to defend yourself. He hit you on the head.

Rob- What should we say to the police?

It is after midnight. A man walks up to you as you work the counter at your convenience store. You ask how you can help him. He says to give him all your money. You back away from the cashregister. The robber charges around the counter and yells at you to give him the money now.

You’re armed. You shoot [at] your attacker. Now the robber runs away. You stop shooting and call the police.

Tiffany- Had a gun on him. Didn’t chase.

Rob- How could this story have been different if the gun was next to the cash register under the counter?

Rob- Was this a lethal threat?

Rob- What do we want our listeners to learn?

Tiffany- Go armed. Practice your presentation until it is automatic. That way you can do several things at one time. You can move out of the way as you present your firearm, you can aim it, and also watch what your attacker is doing.. All at the same time.

“The shooting left a bullet hole in the building’s door.”

Rob- How would I learn to do that?

Rob- Is there anything else you’d suggest for a small but high risk business?

Tiffany- Have security cameras in a high risk business.

Rob- Our defender was wearing his gun. How do people learn to carry concealed? How do they get their concealed carry permit?

Exit-  Rob- that wraps up this episode. Tiffany, thank you for helping us again. Where can we learn more about you?

Rob- After you look at Tiffany articles, then leave us a message on the podcast facebook page.

Tiffany- We share this podcast with you for free.  Please share the podcast with a friend and give us a rating on I-Tunes and Stitcher. We’re also available on Google Play Music,Tunein, Spotify, and iHeart Radio.

I’m Rob Morse. Please say hello if you see me at the United States Concealed Carry Association Exposition. We’ll be back in a few weeks with more Self-Defense Gun Stories.