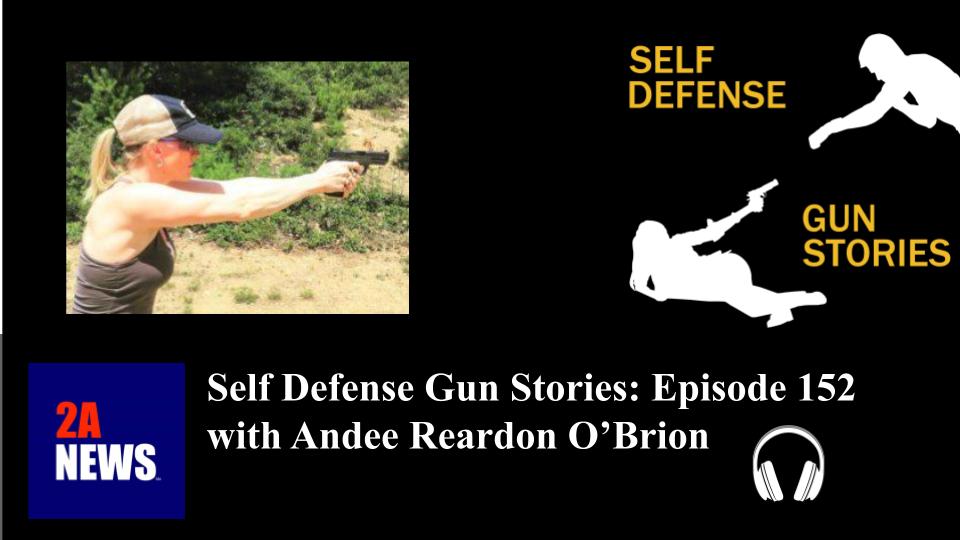 I’m glad you found us and welcome to episode 152 of Self-Defense Gun Stories. This podcast is for people who are curious about self-defense, and for those who are already trained. I’m your host, Rob Morse. We’re joined this week by self-defense instructor Andee Reardon O’brion.

Andee- Hi, Rob.  I’ve been teaching. I also got a new shotgun for Mothers Day. I want to try 3-gun competition.

We’ll talk about recent examples where gun owners were in a life threatening situation. Were they lucky, or did they have a plan? What should we do if we were in their place? We give you the links back to the original news article in our show notes.  Our first story took place last week in Lumberton, North Carolina.

It is six o’clock in the evening and you’re working in the garage at the back of your property.  You hear footsteps and look up to see two men. They tell you to hand over your wallet and phone. One of them has a gun. You’re being robbed in your own backyard.

You own a gun handgun. You’re carrying your firearm on your body. You move and draw your pistol. You shoot your attacker and back out of the garage. Your attackers shoot at you as they run away. You call police.

The police detain you and then release you. They find your wounded attacker nearby. They arrest his accomplice a few hours later.

Your attackers are charged with aggravated assault and felony conspiracy. They have recent charges for felony possession of cocaine, misdemeanor possession of marijuana, and misdemeanor carrying a concealed weapon without a license.

Andee- This is an everyman story. Who isn’t working in the garage, in the garden, or in the front yard some evening when they come home. Criminals will often survey your home ahead of time before attempting a robbery. These men came to the victims home planning to rob him. Thankfully, our defender had a gun on his person. A lot of people who carry get lazy when they come home. When you have been carrying all day, you come home and want to take the gun off to relax.  It’s best we carry while we are at home, especially outside the home.

Rob- No time to get your defensive tools.

Andee- The bad guys aren’t going to wait for you to run back to the house for your gun. You have what you have. That includes your handgun AND your training. Our defender moved. He defended himself, and then he called the police. He did not chase the bad guys.

Rob- The police detained him.

Andee- The police got a call of gunshots. You called the police. You have a gun. They need to sort things out. Tell them that you’re the person who called and that you were attacked. Then you have to shut up.

Andee- You’re dealing with the law. Anything you say can be used against you in court and when you are full of adrenaline your words might not be the best choice to convince a jury that you using your firearm was justified.

Andee- That is enough for now. Our second story happened last week in Radford, Virginia.

You’re at home on a saturday afternoon. You hear your 15 year old son scream for help. You see the neighbors dog biting him. You run outside and see the neighbor trying to stop the dog. It isn’t working and you hear your son’s bones breaking in the dog’s jaws. You own a gun. You’re armed. You shoot the dog and pull him off your son. You call police.

Your son is taken to the hospital for seven bites to his arms and legs. The hospital staff decide to keep your son a few day so he can have surgery to repair his broken leg.

Your son and your neighbor say they were simply talking in the front yard when the dog attacked.

Andee- I have dogs. I have children and neighbors with dogs. I’m a dog lover, but some dogs can instantly turn and if you are unarmed there might not be much you can do. If you physically try to stop a dog from attacking someone, there’s a good chance they will turn and attack you.  Shooting the dog might be your only option. That can be tricking because if they are attacking someone, that means you have to get a really good shot off to prevent missing your target and hitting the one you are trying to save.

Rob- How close do you have to get?

Andee- I would try to get as close as possible. Shoot the dog where you have the best shot and furthest from the victim. Once the dog is down, you’ll have to give immediate medical attention to the person or people who were attacked.  Make sure the scene is safe. Some dangerous dogs run in packs. Hopefully someone had already called 911 and help is on the way. If not, call immediately. I say it all the time… Have a tourniquet and know how to use it. Begin medical treatment until the professionals arrive.

You want EMTs to arrive quickly. So you have to let the police know that the scene is safe.

A holster helps so that you’re not the person waving a gun around when the police arrive.

Rob- Third story- Are you armed  at work?

You’re working behind the counter of a cell phone store. It is late afternoon when you notice another customer walk in. He’s wearing a mask over his face. He has a gun in his hand and he points the gun at you. You’re being robbed at gunpoint.

The news report doesn’t say if you are working alone. It doesn’t say if there are other customers in the store. We don’t know who fired first, but we know you both fired your guns. The important point is that you’re armed and you have your gun on your body. You shoot your attacker and he runs away. You call police.

Andee- If you don’t work in retail, then we’ve all been a customer in one. By the way, I tell my female students to wear their gun while shopping for new clothes.  That way you can know if you can carry in your new outfit.

Retail stores can take in a lot of money and that makes them a target for robbery. It’s important when your working or shopping to keep your gun on you.

Rob- Ah, could you wait right there, I have my gun in the back room.

Andee- You have what you have. Since he was charged with seven counts of using a firearm and with abduction, I assume there were other customers in the store and he told everyone to move.

When this situation starts, the bad guy has his gun out and pointed at you, so that is the wrong time to go for your gun. Wait until you have an advantage. You have to lower your arms to open the cash drawer. Back away from the robber. Move so that another customer or another employee isn’t behind the robber.

Rob- Andee, do I have to shoot the robber from in front, or if he has his gun out and let me step behind him, could I shoot him from behind?

Andee- You were threatened with death or great bodily harm. He still has his gun out. He remains a threat even though the gun is not pointed at you in that second.

Here is what you can’t do. You can not shoot him when the threat is over and he is running out the front door.

You hear someone outside. It is 11pm and you call your husband. Both of you get your guns. Someone kicks their way through your back door. You both shoot the intruder as he walks into your home. You call police.

The police and EMTs arrive a few minutes later.

Andee- Both of them were armed. I want them armed before the bad guy breaks in, so please carry at home. A lot of women take the stance that their men are armed so they don’t need to be. I’d rather be armed alongside my partner than hoping he makes it in a firefight. Two guns are better than one. Not to mention, even if your partner is always carrying, are you always near him/her 100% of the time? Better to both be armed.

Rob- They were both armed, they both fired.

Andee- They had a plan. Always important.

Andee- Have your gun on you. Retreat. Get to your safe place in your home. Call the police. Wait for them to arrive.  If you must, defend yourself. State your complaint to the police, and then be quiet. This defender was a pastor, so it was probably very hard to be quiet.

Rob- After you friend Andee on Facebook, then leave us a message on the podcast facebook page.

I’m Rob Morse. Please say hello if you see me at the United States Concealed Carry Association Exposition. We’ll be back in a few weeks with more Self-Defense Gun Stories.