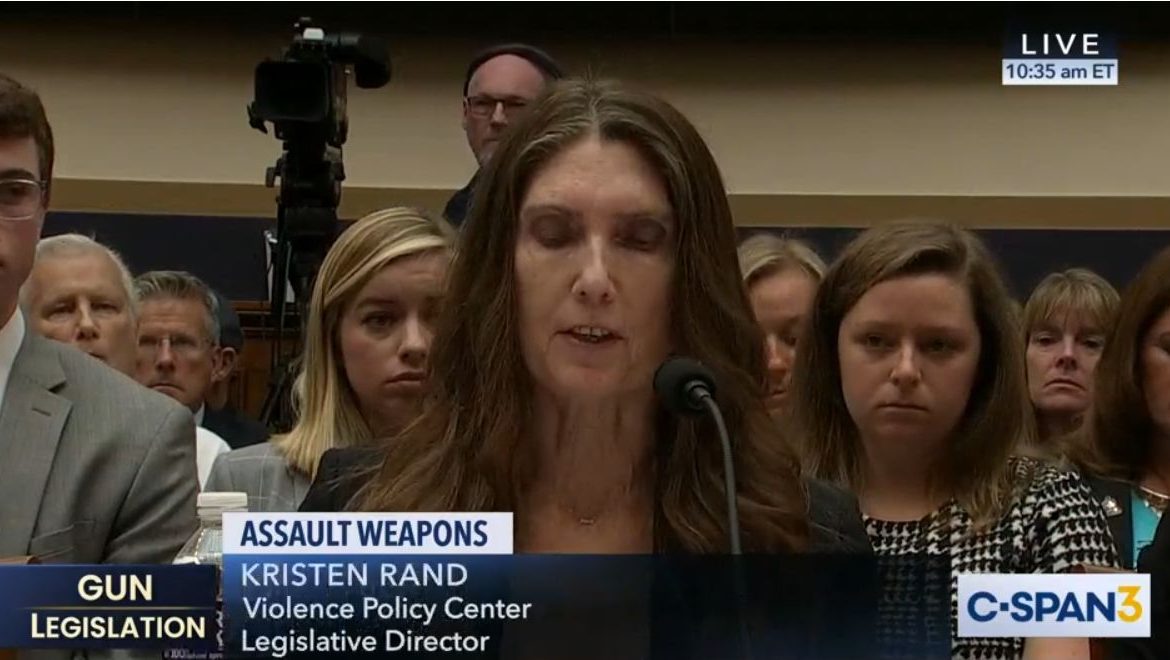 So, the Violence Policy Center was…invited(?) to speak at that Congressional Hearing on “Protecting America from Assault Weapons.”  Which, to me, really shows more desperation on behalf of the Party of Gun Control.

Because anyone who has seriously looked at anything published by the VPC knows they are not to be taken seriously.  From the ominous threat of .50BMG rifles to the public menace of the SKS (cue scream) to “Concealed Carry Killers,” if our gun problem was as bad as they prop it up to be, it’s amazing any of us are left alive.

But yet, here we are, and the typical American does not see Barretts dropping planes from the sky, nor does (s)he have to dodge SKS-fired 7.62x39s while on the way to work, nor are streets running with blood thanks to trigger-happy vigilantes with Concealed Carry permits.

This is a problem with the gun control movement; reality does not match the hype.  But the VPC still tries.  They’ve lost a lot of the clout they had in the ’90s, but yet, they persist.

I’m willing to bet mullets, furbies, and Limp Bizkit are still a thing with them.

And so, to demonstrate their ridiculousness, a-fisking I shall go on their testimony. Feel free to open the document and follow along.

“The VPC is a national non-profit educational organization”


Short-bus educational, sure, but whereas special ed seeks to improve the condition of its students, VPC material is guaranteed to make a hoplophobe all the less informed.

“The gun industry introduced semiautomatic versions of military assault weapons in order to create and exploit new civilian markets for these deadly weapons.”

Except, the AR-15 has been available for civilians since 1964:

Colt’s First Ad for the AR-15, appearing in the Apr 1964 issue of American RiflemanIn fact, it was marketed to civilians before it saw service in the jungles of VIetnam.

I know progressives are so forward-looking that they disregard history, but yeah, American gun culture existed before the founding of the VPC.

“The most significant assault weapon functional design features are: (1) ability to accept a detachable high-capacity ammunition magazine; (2) a rear pistol or thumb-hole grip; and, (3) a forward grip or barrel shroud.”

This deviates grossly from a 1970s DoD document on Assault Weapons, giving three other criteria:

VPC’s definition has a distinct colonic odor to it.

And to prove their point, they give two pictures from mid-’80s issues of Guns and Ammo.

Except, I doubt they have read the associated articles.  G&A doesn’t talk exclusively about civilian arms. It often writes about developments in military hardware.  Any verbage from the pertinent articles is suspiciously lacking.

And, none of this addresses the erroneous-gone-nebulous usage of “Assault Weapon.”  Smoke and mirrors is the VPC’s stock in trade.

Another example is accusing the gun industry of playing up the lethality of military-style weapons in its marketing, and tries to use this to support the idea:

“One recent example from FN’s 2019 product catalog brags, ‘Our tactical firearms are the stuff of legend. Every innovation is born inthe battlefront, built for the home front….'”

But the FN ad talks a lot about dependability and reliability, which are very desirable traits in a firearm–lethality isn’t even mentioned.

In hermeneutics, this is called “eisegesis,” or trying to read something into the text that confirms your own presuppositions, but really isn’t borne out by the text itself.

“Prior to the 1980s, the United States very rarely experienced the trauma of a public mass shooting.”

But they happened.  Remember the University of Texas in 1966?  That wasn’t perpetrated with an “assault rifle.”

Also, how much of what the United States experiences is due to media exposure?  In similar measure, we hear a lot more about teachers molesting their students now than prior to the ’80s, too.

Seeing also that the overwhelming number of AR owners don’t commit murder, much less mass shootings, what other factors might there be?

This diagram they give on the anatomy of an “assault rifle” is also a hoot:

This is the VPC’s “Barrel Shroud” moment.  How many ARs do you see carried concealed nowadays?  It ain’t a hot topic among CCW practitioners, let me tell ya.

And speaking of Maloney-esque gaffes:

“Barrel shroud makes it easier to grip the gun without touching the hot barrel, often there are small holes for ventilation”

VPC, that’s a handguard, and is functionally no different from the forearms we have seen on long guns for literally hundreds of years.

Here’s evidence that even a blind pig finds a truffle every now and then.

Magazine wells are nothing new, and have been largely standard almost since the advent of semi-automatic firearms.

“The impact of the gun industry’s intensifying focus on military-style firearms can be seen in the weapons chosen by today’s mass shooters.”

Except, for the past 37 years, mass shooters still tend to prefer handguns.  By a pretty wide margin, as attested to by the data gathered by even Mother Jones.

“The Dayton shooting grimly highlighted the fact that not all assault weapons are rifles. The ‘assault weapon’ category is, in fact, rapidly expanding to include a new breed of assault pistols modeled after AR and AK-type rifles. These pistols combine the firepower of a rifle with the concealability of a pistol.”

How well did the Dayton shooter conceal his “pistol”–seeing it was an AR platform with a 11.5″ barrel, 30″ overall length, and a bulky as hell Beta-C mag?

Seeing that he simply walked up to his venue with the weapon in open view at all times makes me think that concealability wasn’t what he had in mind.

To further muddy the issue, the VPC includes a picture of this Ad:

That weapon might be based on the AR platform, but a Sig MPX is chambered for a pistol round–9mmx19.  Good luck getting rifle-class firepower out of that one.

“The Violence Policy Center performed an analysis of unpublished information fromthe FBI and determined that one of five law enforcement officers slain in the line of duty in 2016 and 2017 were killed with assault weapons.”

Conveniently, the only source for this information is the VPC, and no source data is provided so others can see how they reached that conclusion.

Another statistic with the distinct air of the lower GI tract. Methinks VPC=”Verily Pulled from our Colon”

“the Violence Policy Center obtained information on guns seized by the Philadelphia Police Department from 2007 through mid-2013. Thirty-one percent of the rifles recovered were assault rifles. The crimes associated with those assault rifles included homicides, aggravated assaults (including assaults on family and law enforcement), robberies, weapon offenses, and drug offenses.”

Again, no source data given, so we can’t tell what portion of that 31% were actually used in a violent crime versus what happened to be recovered in a drug bust.

From what I’ve seen of ATF data, the overwhelming majority of crimes where a gun was recovered happened to be illegal possession.

Awful, just awful.  I do believe it is the VPC that set the standard for deceptive reporting, and it seems gun control propaganda, instead of trying to correct that legacy, has by and large chosen to embrace and build upon it.

That keeps guys like me in business, but does no favors for the people they intend to “educate” about gun issues; provided, of course, that bearing the truth, the whole truth, and nothing but the truth was really their aim to begin with.