Published on June 15, 2019  |  By Jeremy Hatfield
In Second Amendment, Uncategorized 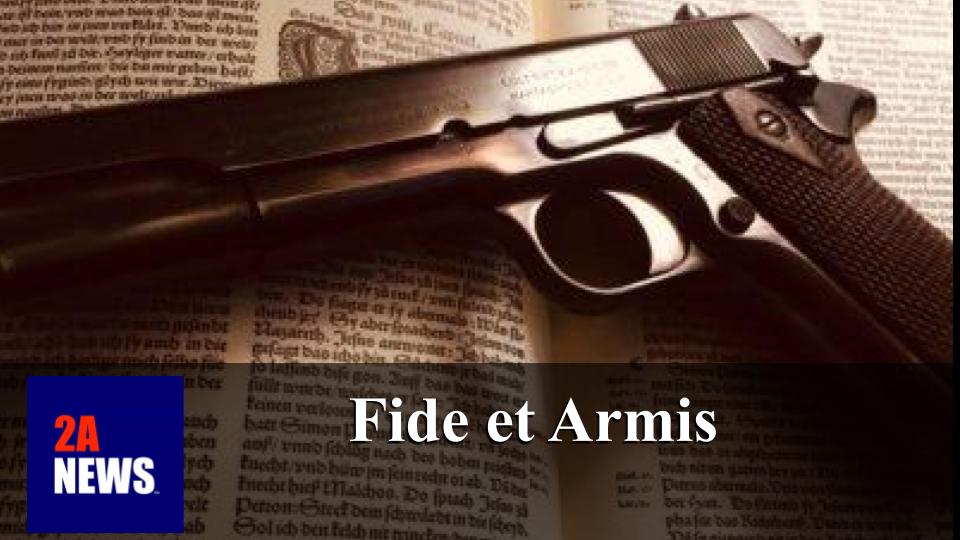 One perspective on gun ownership and faith.

How can a believer manage guns and God? As with any issue, I turn to Paul’s advice governing those negotiable issues of our faith–“Let each be fully assured in his own mind.” For that, you need to go to God for your best answer. Too often we try to second-guess Him (as if He were out of reach for an answer) and wind up going to one of two extremes: license, or excessive limitation. But where the Spirit of the Lord is, there is liberty, which strikes the best balance.

And so, I can respect pacifists that eschew violence for His sake, and make no demands on their conscience otherwise–in fact, it’s probably the highest ideal. But a pair of quotes from the 1959 movie Ben-Hur best describes the other side of the coin:

Skeik Ilderim: Balthasar is a good man. But until all men are like him, we must keep our swords bright!

Judah Ben-Hur: And our intentions true!

Until all of us can attain to this same ideal, we need to recognize the world we live in, and prepare for it accordingly. If it involves arms, then let it be done with just restraint, with the view of saving lives, not wantonly taking them.

Over the years, I have heard a few gun-control advocates quote Jesus’ warning in the Garden of Gethsemane: “Those who live by the sword shall die by the sword!” I seriously doubt this is an admonition to be more Christlike–since usually these same people are apt to ignore Christ in most other matters–as it is to coerce those who do take the Bible more seriously to adopt their side of the issue by hijacking Christ’s moral reputation. However, these same people tend to know very little about both gun issues and matters of the Christian faith.

Most remarks I’ve heard from such people tend to amount to little more than snark, such as “I’m sorry, passages mentioning assault rifles are missing from my bible” (the use of the lower case being deliberate). I find it strange that some of these people will use that same line of argument to sanction other issues–such as the notion that since Jesus apparently said nothing directly against homosexuals, he must therefore be giving it the thumbs-up–but not apply the same standard to defensive weapons. However, the Bible is very clear on both issues, and in the case of weapons, Jesus did, in fact, directly say a few things about them.

One thing that is important to remember is that Jesus, during His 33 years on earth, was a law-observant Jew, a point He drove home when He said that He had come to fulfill the Law. That same law made provisions for the use of deadly force in the defense of life and property, and with it, the ownership of weapons.

(For further insight on this, I would strongly recommend Greg Hopkins’ A Time to Kill: The Myth of Christian Pacifism)

And so, Jesus’ instruction for his disciples to buy swords was not an ungodly notion. But also notice it wasn’t a universal mandate. In the Gospel of Luke, chapter 22, shortly after telling his disciples about swords, they immediately produced two of them (which must have already been in their possession). Jesus then said, “It is enough,” which is telling. He wasn’t encouraging them all to be armed for the sake of establishing Him as a king by force of arms–that wasn’t His focus, and neither was it supposed to be a major point among His followers; He was simply telling them to provide for a physical need, much like provisions made for food and the other necessities of life stored away in money bags and knapsacks. Only here, He was addressing the need for self-defense.

Some will argue that this passage is allegorical, and that really refers to the Word of God. I can understand reading and applying this passage in that manner, where appropriate. But the fact remains that the two swords that were brought forth weren’t scrolls of Scripture nor words of prophecy they had written down; they were actual weapons.

The Greek word for “sword” seems to be rooted in a word that suggests these were effective tools for fighting. And so I am going to divert a little from my analysis of Jesus’ words to explain a concept that those unfamiliar with guns and self-defense issues may not have considered.

Another attempted moral complaint against guns is that “they were designed for only one thing: killing.” It is true that they were designed to apply lethal force against a target. But this lethality carries with it a weapon’s greatest benefit: to stop an assailant from what he was doing or intending to do.

This doesn’t always involve death. There is a milieu of “stopping power” that weapons possess. While the one that most readily comes to mind are those situations where the trigger is pulled, the assailant is fatally hit, and he dies (therefore stopping him from what he was doing), there are other possible outcomes to similar situations:

– Trigger pulled, assailant is hit, and he drops, or runs to avoid further injury. Either way, his actions are stopped.

– Trigger pulled, assailant is missed, and he reconsiders his situation and stops or runs away. Again, his former actions are stopped.

– Weapon is presented, trigger is not pulled, and the assailant reconsiders. This, according to research, tends to be the most common outcome of what are called successful defensive gun uses.

– The possibility of encountering any of the above causes the potential assailant to find something else to do. This is considered the greatest benefit of concealed carry, and explains why states adopting “shall issue” laws (or even the more liberalized “Constitutional Carry”) have not become bloodbaths, despite the goriest fantasies that gun-control advocates tend to dream up.

And it is all due to the fact that they are lethal, and present a real-world problem to a potential attacker.

Now, getting back to Jesus and weapons, namely the quote gun-control advocates like to use. What does it mean to “live by the sword?” In light of the former discussion of the provisions given in the Law, apparently He wasn’t condemning self-defense, given His observance of the Law.

What else involves living by the sword? Soldiery? He praised a centurion for having more faith than His own people. But never once did He condemn him for being a professional soldier. Other soldiers asked Him what shall they do with their lives (Luke 3), and not once did he condemn them for their profession, neither (since historically, all cultures have needed armed men for defense in one form or another), but only required that they not use their station to oppress others.

That leaves us with bandits, whose choice of lifestyle–forcibly taking the property of others for their own enrichment–leaves them at high risk for violence. Now, there is also a risk for those who choose to lead an armed lifestyle, and this can be included in Jesus’ warning. But using it as an outright condemnation of weapons is unwarranted.

Finally, this same quote is only a part of the verse in question. It’s just the latter half of Matthew 26:52, but the former half reads, “But Jesus said to him, ‘Put your sword back into its place…'” He didn’t say, “surrender it to the authorities” nor “throw it away because it’s evil.” But put it back in its place. There is a time and place for all things, as it reads in Ecclesiastes. But as Jesus was not interested in establishing Himself as a political power, applying the force of the sword was not fitting for that time nor that place.

And so, overall, the hoplophobic attempts to leverage Jesus to their own ends is really a messy misrepresentation of truth, borne largely of ignorance.

Don’t be ignorant, and don’t let your rights, nor your faith, be dictated by those who are.