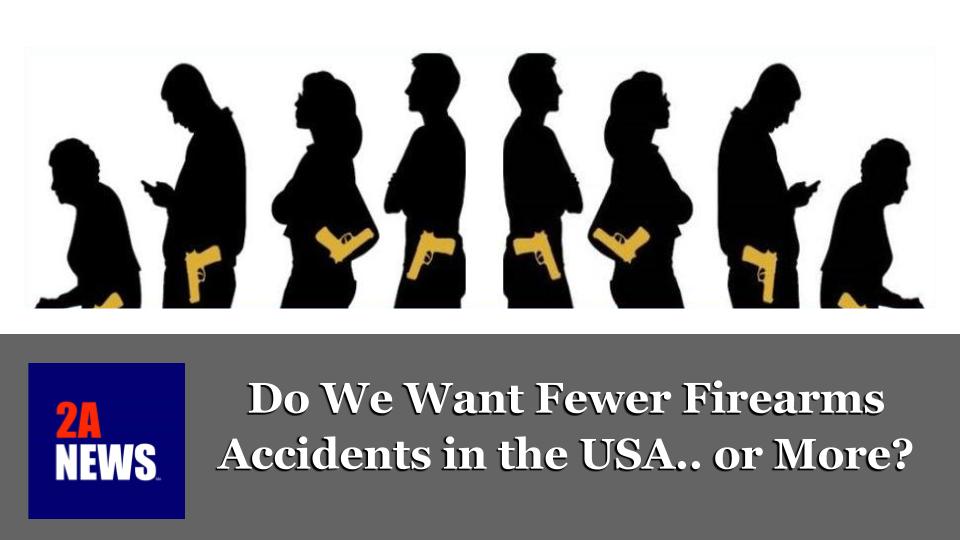 I want to make us safer and we might have more firearms accidents than we have today. I put that shocking statement in front of you rather than stand accused of it later. You might think that fewer guns would make us safer. The more I learn, the more I doubt that approach.

Let’s be clear that I don’t want firearms accidents to happen. Nobody should. What I want is for fewer of us to be hurt. If many of us are attacked by criminals and legal gun owners are very safe with their firearms, then more guns may mean fewer injuries overall. Which approach will save lives, more honest people with guns, or if fewer honest people go armed? Crime and medical reports give us some information.

I found data from 2017. The US Center for Disease Control and Prevention said we had 676 children under 12 years old injured with a firearm that year. That is about two a day, and that sounds horrible to me. I kept reading and found out that only one-out-of-6000 accidents involved a firearm. Also, all the unknown causes were classified as “accidents”. We don’t know if the firearms accident was because a child found an unsecured firearm, or if the thug down the street shot at another gang member and hit an innocent kid down the street. We don’t know if the accident resulted in a cut or a life threatening injury.

We have some numbers, but I don’t have clear messages from them. I’m am left with two impressions. The good news is that firearms accidents involving children are rare, at about one child out of 78 thousand in 2017. Also, we could prevent some accidents if we are careful with our guns.

Now let’s look at intentional use of firearms. We have over 300 thousand aggravated assaults each year. Add in an additional 300 thousand sexual assaults. Those numbers are shocking. I want fewer people to be victimized, and I assume that you do too. Those numbers indicate we’re about a thousand times more likely to be victims of a criminal attack than to have a child injured in a firearms accident. I didn’t know that before I looked.

Let’s put those facts into perspective. Suppose there were a rule that would eliminate half the accidents with children and guns. If that same gun-control rule disarmed only one crime victim out of a thousand, then that rule would probably get more of us hurt rather than reduce the number of injuries.

There is more. The crime statistics I found said that women who use a gun in self defense are not raped. Fighting against the sexual assailant works most of the time but there were zero completed rapes when the victim defended themselves with a firearm. It is true that the number of women who used a firearm to stop an attempted rape isn’t statistically large. Maybe, if we collected date for many years, then we might find someone who used a gun for defense and was raped, but that doesn’t happen often.

I think we would have fewer rapes if more people were armed.
The downside is that we might have more accidents with firearms.

Firearms are common and they are not going away. We seldom see guns in public even though 40 percent of us have a gun in the home. More than half of the people who don’t own guns say they could see themselves as a gun owner in the future. About 20 million of us have a permit to carry a concealed firearm in public today. We don’t see them because concealed is concealed.

There are real risks when we disarm the victims. A few weeks ago, twelve people were murdered in a gun free zone in Virginia Beach. Some of the victims at the Virginia Beach municipal building wanted to be armed. They disarmed themselves because they were afraid of being fired if their employer found out they had a gun at work. Their employer, the city, was willing to trade their lives in a mass murder against the possibility that an employee might have a negligent discharge of a firearm at work. That bet worked for the city’s risk manager.

That public policy didn’t work for the city employees who were defenseless during the murderous attack. Even though the police arrived in record time, that risk reduction strategy was fatally flawed for the unarmed victims.

Details matter. If we change public policy, then we have to keep perspective on the relative size of both risks and of rewards. We want to see the world in the correct proportions rather than stay stuck in a distorted fantasy world.

If there were no risk of firearms accidents, then we’d want all the good guys to carry guns all the time. In fact, we do have negligent discharges of a firearm. Fortunately for us, ordinary people have a good idea of how physically careful they are and how mentally stable they are. My experience is that people who don’t feel comfortable with guns don’t buy them. Those who buy them know when to put them away.

Trying to protect us by disarming the good guys and gals is a bad goal and gets us injured or killed.

We are at greater risk in public than when we’re at home. I think we need more armed citizens so we can save more lives. We need lower permit fees for concealed carry and fewer gun free zones. That is what the numbers tell me.

We might have more accidents if five times more of us were armed. I know that, and I’ll be there with you teaching firearms education and safety. I’ll cry when an innocent person is injured in an accident, but I’ll shed fewer tears because fewer of us will be hurt.