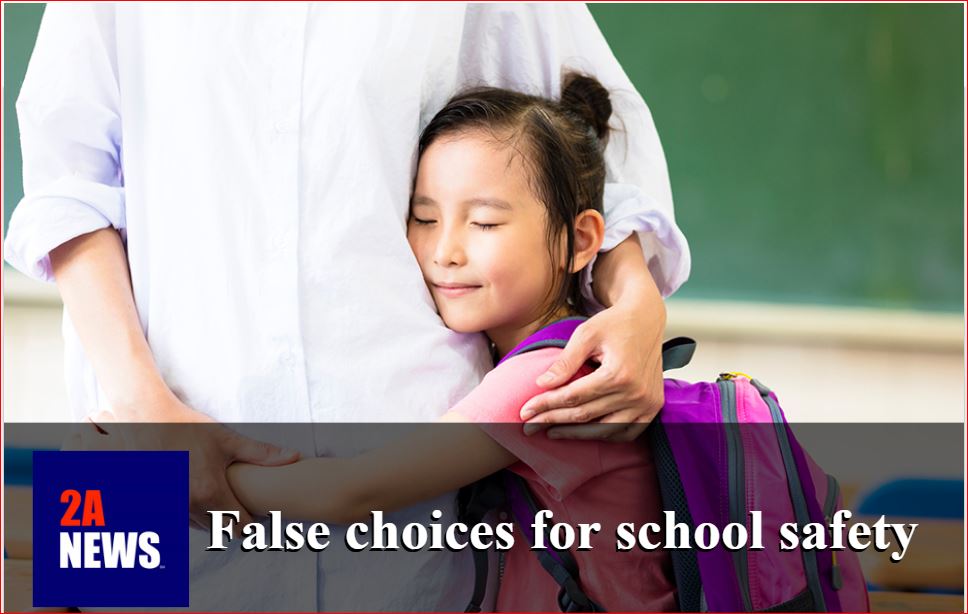 Protecting our children in school

How should we protect our children at school?

Asking skewed and inappropriate questions leads to inappropriate answers as we work to protect our children. We’ve seen special interests, including government officials, do exactly that. That dishonest inquiry furthers their agenda, rather than ours. Protecting our children is too important a problem to leave to politicians.

Most of us learned something important as we reached adolescence; the answer you got depended on how you asked the question. That is certainly true when we read skewed questions about defending our kids.

Should we give guns to teachers?

“Do we want the new kindergarten teacher to look like this?”

Is this the new kindergarten teacher?

What do real solutions look like as we work to protect our children in school? Here is a more moderate perspective on protecting our kids.

I’ve taken the training required for armed teachers. I took the armed defense and medical training over several years. I’ve also spoken to staff members who volunteered to be first responders at their school. I met dozens of educators who came from at least a half dozen states. I saw the approved training programs used in both Ohio and Colorado. I also listened to the experts who determined what first responders need to know.

The next perspective is that violent attacks on our schools are rare; school attacks are horrific, but unlikely. That means we shouldn’t go overboard and impose costly solutions to solve improbable problems. Putting little Johnny in an armored box creates more problems than it solves.

Protecting our students isn’t a new problem. We’ve faced it and solved it for years. It has been 19 years since the attack at Columbine High School. It has been six years since the attack at Sandy Hook Elementary. We’ve qualified, trained, and tested thousands of volunteer school staff to be first responders in that time. We accumulated thousands of semesters of experience with armed first responders in our schools. The volunteer staff I met are exactly the sort of people I want to protect my children.

You didn’t notice these armed defenders on campus because we don’t want you to see them. An armed man wearing a uniform on campus acts as a visible deterrent.. until the moment he isn’t. The uniformed school resource officer is often the first target of an attack. Alternatively, the attackers simply wait until the SRO is off campus.

Trained volunteers have significant advantages over uniformed police. Unlike the police, these volunteers are anonymous. Any adult staff member could be an armed defender. An attacker doesn’t know who is and who isn’t an armed and trained first responder. Unfortunately, we’ve seen School Resource Officers run away from an attack. We have not seen trained volunteers do that.

Many defenders are better than fewer. Quantity has a quality of its own. It is better to have two adequate defenders on each hallway than to have a super-ninja at the other end of campus. The closer the first responders are to the problem, the sooner the threat will end and we can treat the injured. We can train the volunteers in a school district for the price of a single school resource officer.

We now have classes for medical first responders in our school. Lots of school staff can be trained to stop bleeding and make sure the injured are still breathing when EMTs reach them. Oddly enough, some teachers unions wanted to fire school staff who receive trauma training. That shows the politics I talked about earlier. We can’t afford it.

Less is more when it comes to training. The people who set the curriculum for first responders in our schools know what they are doing. They have decades of experience working with law enforcement agencies across the country. They have a very good idea of what first responders need, and what they don’t.

Beware a politician who says that first responders “need” weeks or months of training. If they need that much time, then they are either the wrong candidate or they are being trained for the wrong job. I’ve seen what these volunteer defenders can do after 30 hours of training, and they are very impressive. Imposing inappropriate training requirements means more of our children will die.

I understand the concern we have for our kids safety. I hope this helps us ask the right questions. I think this is a more real perspective, and our children deserve that clarity.