Published on May 9, 2019  |  By Rob Morse
In Gun-Free Zones, Politics, Second Amendment 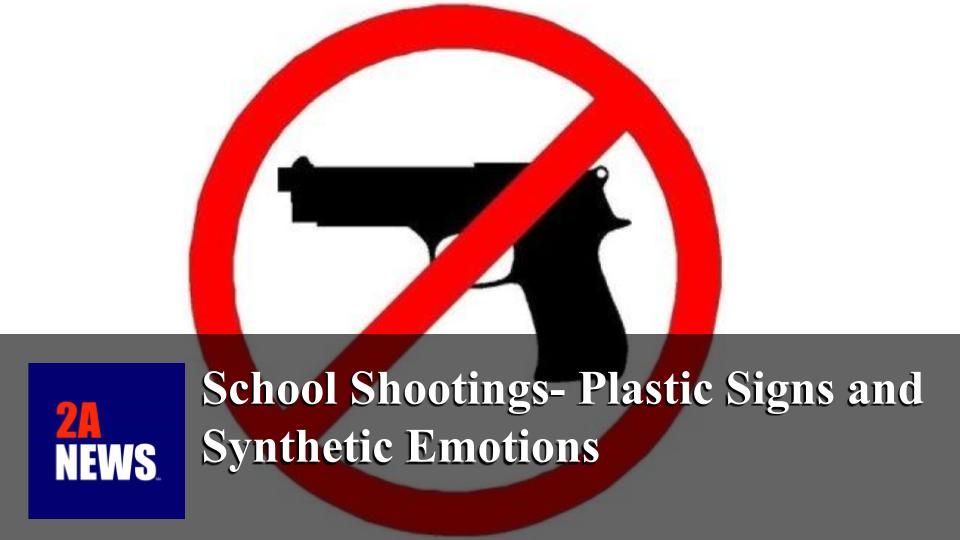 Two armed murderers entered a school south of Denver yesterday.  I’m sure that a number of special interests will place the blame for these attacks. They never let an atrocity go to waste. I’ve seen everything from global warming to the political party in office used as a scapegoat to promote assorted causes. I want to be careful about what we know, what is probably true, and what we should expect. One thing we know is that this attack doesn’t come as a surprise.

One of the murderers was a trans-sexual female who preferred to be called a boy. The other murderer was an 18 year old male. Preliminary reports indicate the male student felt bullied. Both murderers used handguns to attack students and staff.

We can speculate about their motive. If they were at all like the vast majority of mass murderers in recent years, these murderers counted on the mass media to turn them into instant celebrities. If our media treats these murders as they treated earlier murderers, then the attackers will receive a billion dollars of free publicity. Time after time, that media promotional campaign pays for the next narcissistic murderer who wants to see his name in the news.

That isn’t speculation; it is a conclusion reached by both psychological research and by investigating previous mass murderers. This media campaign earns the news organization big bucks by delivering new viewers. It is paid for with the blood of our children.

We know that the police response at this Highlands Ranch school was extraordinary. The police arrived in a few minutes. In those two minutes, these murderers shot eight people and one of them died. Some of the victims remain at risk. The usual response time is more than 5 minutes.

That brings us to the reality that most parents want to evade. Even two minutes is too long to wait for help. Any armed individual can shoot many people if the murderer is unopposed for several minutes.

That isn’t because of the particular characteristics of the weapon that makes the attack so deadly, but the fact that the murderers were attacking victims who could neither run to safety nor fight back. As we’ve seen before, the murderers carefully chose their victims and the location of the attack. The murderers wanted easy victims and that is what we delivered. We consciously chose to protect our children with plastic signs that said no-guns allowed.

I’ve trained with school staff who volunteered to be armed first responders. They trained to stop an armed threat and to stop the bleeding until EMTs arrive. I took this training in central Colorado alongside teachers from Colorado. As far as I know, none of my classmates were from the Highlands School District where the attack occurred. The teachers I met were passionate about saving lives. I suspect that there are many school staff in the Highlands district who feel the same way as the teachers I saw.

Every mass murder is unique, but each ones follows a general pattern. We have never seen a plastic “no-gun sign” stop a mass murderer. In contrast, we have yet to see a murderer attack a school where armed school staff were present. Earlier I’d claimed that plastic signs are ineffective, but the plastic sign that says “armed staff” seems to work so far. We have accumulated millions of school days with armed staff on campus. So far they have been both safe and effective.

Staff May be Armed

That shouldn’t surprise anyone. We wouldn’t turn off the fire alarms, remove fire extinguishers and first aid boxes at our schools and replace them with a plastic sign that says “No Fire Allowed”. That would be ridiculous, yet we did that when it came to protecting our children from violence on campus.

We expect adults at the scene to be first responders until professionals arrive. We expect adults to stop small fires and treat injuries if they can.. even if it doesn’t say that in their union contract. In my experience, teachers are protectors who want to take care of “their kids.”

Our luck won’t last. At some point, an attacker will choose a school with armed staff. You and I pray that never happens. Thank god there are a few teachers who pray they are there in time to stop the murderer. I thank them every day. More school staff wish they could be defenders. I know this because I’ve met many of them and they told me so.

I’ve listened to law enforcement officials from across the country who want school staff to be trained and armed. Law enforcement officers see violence every day. I suspect that makes many of us uncomfortable. Rather than take the advice of professionals who deal with violence, we want to pretend that violence doesn’t exist. We want to pretend that a sign will keep us safe and keep our children safe.

It wasn’t the plastic “no-guns” sign that failed in Highland, but the adults who believed it. We can fix that tomorrow.. and we should.