Published on May 20, 2019  |  By Mike Piwaworski
In Laws & Legal Challenges, Second Amendment 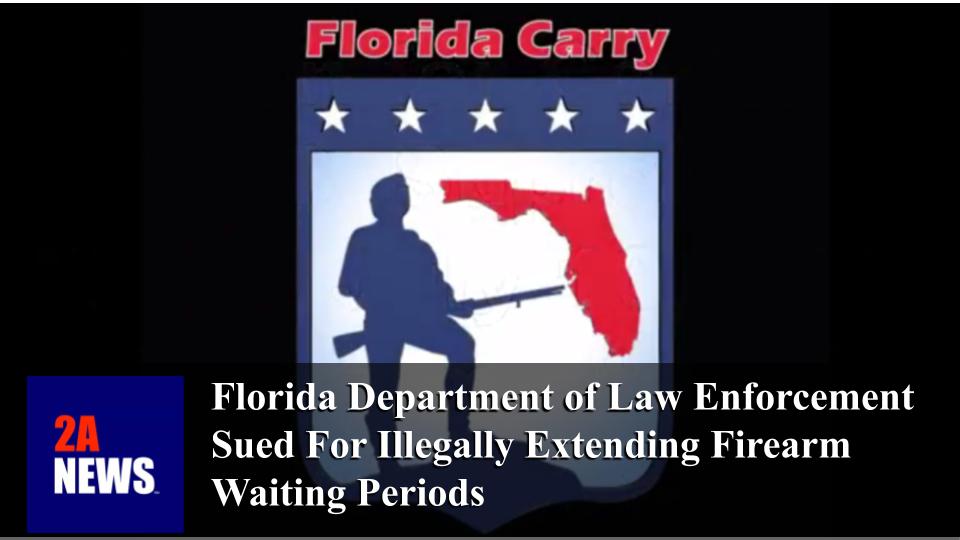 On Monday, May 13th, Florida Carry, which is Florida’s most recognized and effective grassroots Second Amendment organization, filed a class action lawsuit against the Florida Department of Law Enforcement. According to the lawsuit, the FDLE has taken the law into their own hands when determining who can and who can not purchase a firearm, federal and state law be damned. The FDLE has created their own determination category when licensed dealers conduct background checks called ‘decision pending.’ This ‘decision pending’ category has no required determination timeline attached to it as required under Florida statutes. By all external analysis, the FDLE has written their own laws and policies when conducting firearms purchase reviews in direct contradiction to Florida’s Firearm Preemption statute (FSS 790.33) which is clear in stating only the Florida Legislature can create any law, policy or procedure concerning firearms.

Prior to the ‘knee jerk’ Marjorie Stoneman Douglas Public Safety Act becoming law in March of 2018 after the February 14, 2018 mass shooting in Parkland, Florida, anyone aged 18 or over in Florida could purchase a long gun from a licensed dealer without a waiting period. Handguns were able to be purchased by any Florida resident aged 21 or over from a licensed dealer but there was a three business day wait imposed unless the purchaser had a Florida Concealed Weapons Permit. Since the MSD Act of 2018 became law, to purchase any type or firearm in Florida from a dealer, the purchaser has to be aged 21 or older and will have to wait the ‘unconstitutional’ three business days to take the firearm home unless they have a Florida Concealed Weapons Permit. Why is it unconstitutional you ask? Because for the life of me I can’t find anything in the Second Amendment about waiting periods.

The Commissioner of the FDLE, Richard Swearingen, has held his position since being confirmed by the Florida Cabinet in January 2015 after being named Commissioner by Governor Rick Scott the month before. Evidently in the past 4 years as commissioner and 30 years overall with the FDLE, he has never had the opportunity to review Florida’s Firearm Preemption law or Firearm Sale and Delivery law. Florida Law (FSS 790.065) says that when conducting a name based background check for firearms purchase, the decision must be an; Approval, Non-Approval, Conditional Approval, or Conditional Non-Approval. Approval and Non-Approval are pretty simple to figure out but what are the Conditionals? Under the federal guidelines these would be called “Pending.” It means Florida is not sure and would like to use the full 24 working hours or three business days as allowed under Florida Law to make the determination. A Conditional Approval means the purchaser can take the firearm home at the end of the three business day wait or when FDLE changes the Conditional Approval to an Approval, whichever comes first. The Conditional Non-Approval means the purchaser does not get to take the firearm home. This occurs mostly in the case of individuals charged with or indicted for crimes but not yet through the criminal justice system far enough to receive a disposition.

In March of 2018, the same time the hurried Marjorie Stoneman Douglas Act was becoming law, the FDLE decided they wanted a different category called ‘decision pending.’ Under ‘decision pending’ there is no timeline to render a decision and there is no appeals process like you would be entitled to if you received a Non-Approval or Conditional Non-Approval. Purchasers getting a ‘decision pending’ are stuck in limbo land. Those cited in Florida Carry’s lawsuit were in limbo status for 3 months, 4 months, and 7 months. On Tuesday May 14th, the day after the lawsuit was filed, all three of the victims received final decisions from the FDLE. FDLE stated those decisions coming the day after the lawsuit was filed was purely coincidence.

Florida’s new governor, Ron DeSantis appears to be Florida’s most pro gun governor in years. Let’s see if he holds FDLE Commissioner Richard Swearingen to the same standard he held suspended Broward Sheriff Scott Israel to before removing him from office for malfeasance among many things.

For now the lawsuit continues. More victims of FDLE’s malfeasance are identified and are coming forward everyday. If you’re a victim or you know someone else who is, please contact Florida Carry at FloridaCarry.org today.