Published on May 27, 2019  |  By DeputyMatt
In Law Enforcement & Crime Prevention 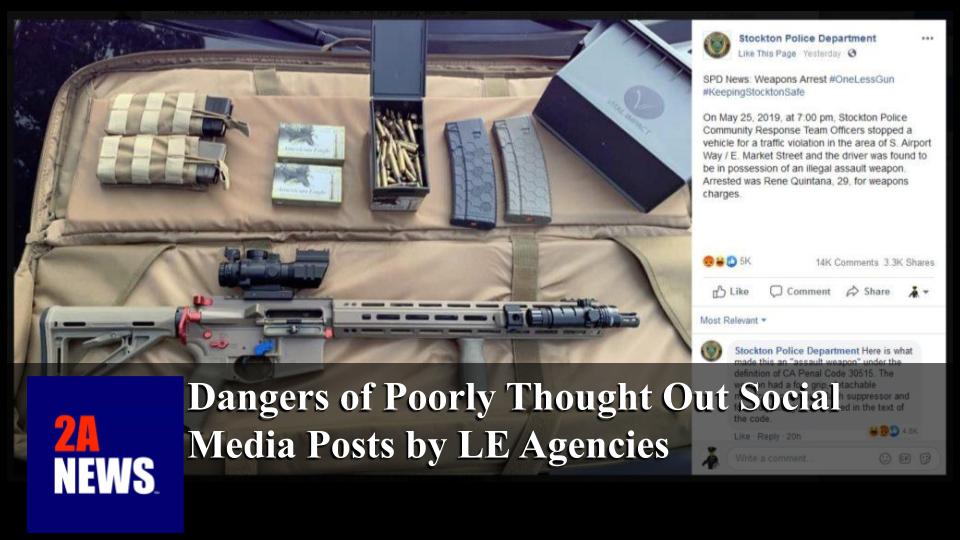 I don’t like to jam up law enforcement agencies, especially not ones that are local to me and ones that I have friends who work there, but dammit Stockton PD, really? Or maybe it is just the person who runs your social media, but this Facebook post is absolutely HORRIBLE!

I get it, that gun is illegal in CA, because idiot lawmakers who don’t understand guns or criminals decided it should be. I have one almost identical to it. Mine is legal though, because it is a registered “assault weapon.” Not because mine is any more or less dangerous than the one in the photo, but purely because I have a piece of paper that says the government knows I own it.

This social media post is severely tone deaf. It is very gloaty about what appears to be the Stockton Police Department turning an otherwise law abiding citizen into a felon for having a gun that is perfectly legal in 90% of the country. If you can’t see that as a negative perception issue, you are clueless.

If the person who had that gun was a criminal up to no good, was a parolee or probationer, was a member of a criminal street gang, was a convicted felon, was a dope dealer or a pimp, was robbing a bank or doing a home invasion, was up to something criminal, other than a traffic violation, I and the majority of the people commenting negatively on your FB post would feel differently.

In speaking with friends who work for Stockton PD, who know some of the cops involved in this arrest, I have been assured that this is in fact a case of “there is much more to this story than what appears.”

However, sadly, in this case, you provided nothing to make this arrest seem reasonable even to a bunch of CA cops, let alone pro-gun folks from around the country.  On the contrary, you provided ammo for those who want to call our profession things such statists, fascists, or nazis.

As I look through the comments on that post, I see actual friends of mine making very negative comments based on this post.  And to be honest, I don’t blame them one bit.

This one Facebook post has single-handedly destroyed so much work so many of us have done to assure the pro-gun community, of which I am a proud member, that we cops are not going to come after them merely because of these ridiculous gun laws.

Not well played at all. This post reminds me of the posts made by some UK agencies where they have bragged about arresting people for possessing scissors and screwdrivers.

Or the NYPD posting a picture of an “arsenal” that contained perhaps a single actual firearm.

Please let this incident serve as a HUGE reminder to those who run the social media accounts for law enforcement agencies.  Sometimes, silence is the better part of valor.  If you cannot share all of the pertinent info regarding a particular arrest, perhaps you should not share anything at all, lest you unleash blowback that hits every LE agency out there, not just you.