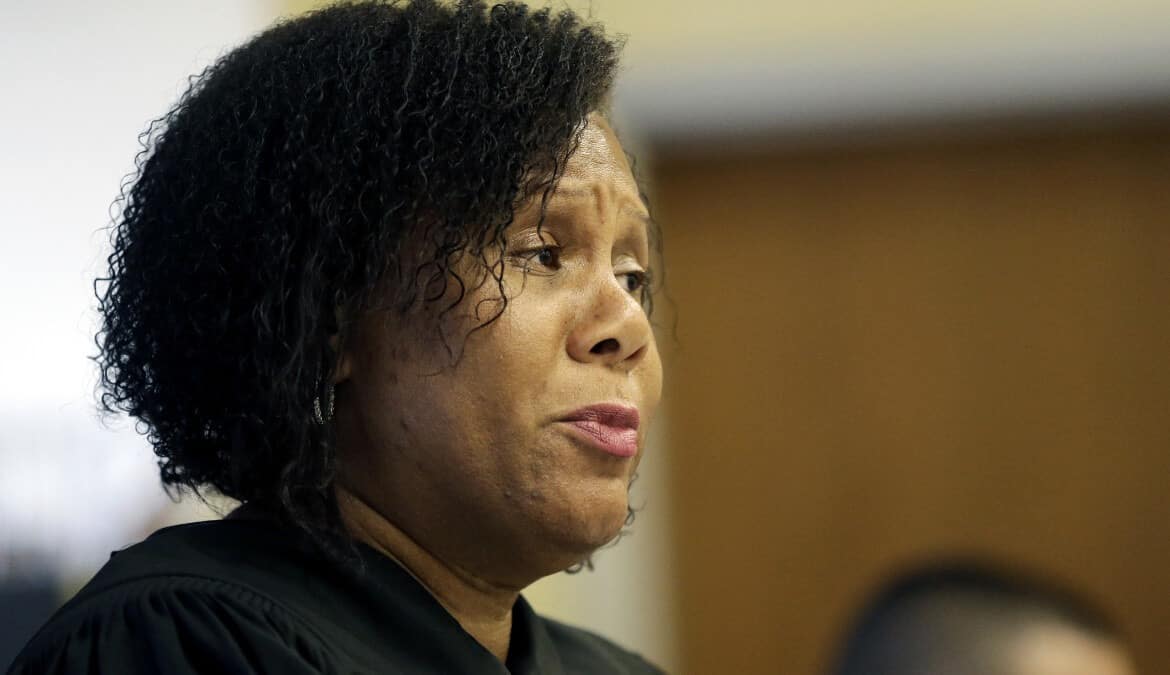 Hudson County Superior Court Judge Martha Royster scolded two New Jersey police officers on Friday for defending themselves from a violent attacker, calling the officers defense of their own lives “inappropriate” and “rash”.

On July 13, 2015, police officer Melvin Santiago was shot and killed while responding to a report of a robbery at a Jersey City Walgreens drug store. Seeing Santiago’s patrol car approaching, the killer, Lawrence Campbell, boasted to his friends, “Watch the TV news later. I’m going to be famous.” Campbell then approached Santiago, who was getting out of his vehicle, and fired 13 shots through the car’s open door with a pistol he had stolen from the Walgreens security guard, killing Santiago.

The enraged Highsmith, however, threw the post like a spear through the passenger side window of the police vehicle, striking one of the officers in the temple.  Highsmith then rushed the vehicle, jumped onto its running board, and struggled to retrieve the other officer’s rifle, shouting, “You’re gonna kill me or I’m gonna kill you!” After a few seconds, the officer was able to wrest the rifle away from Highsmith, who then attempted to reach for the door handle. The officer fired three rounds through the door, striking Highsmith.

Meanwhile, the injured officer, who had exited the vehicle, ran to the passenger side and ordered Highsmith to show him his hands. Highsmith refused, and continued to try to open the patrol vehicle’s door. Fearing for his partner’s safety, the injured officer then fired two additional shots at Highsmith, who turned and ran a few steps before collapsing.

A surveillance camera captured part of the altercation, showing Highsmith throwing the fencepost and then rushing toward the vehicle.

Judge scolds the officers for defending their lives

On Friday, Highsmith appeared before Superior Court Judge Martha Royster, pleading guilty to the assault. Royster, however, appeared less interested in holding Highsmith to account, than in condemning the arresting officers, portraying them as trigger-happy vigilantes who decided to shoot an innocent man out for a nightly stroll. Royster complained, “You are supposed to understand how to deal with the community.”

Apparently ignoring the fact that Highsmith had assaulted the officers in an unprovoked attack with a “sharpened six-foot fencepost”, and then tried to grab the officer’s own rifle, Judge Royster lamented, “He was unarmed!” The judge then scoffed, “To describe it as an assault on both officers is a stretch.” She added, “What is clear, is that the reaction of the officer, whatever was occurring, [was] to shoot the defendant through a door.”

“An undeniable bias against law enforcement”

Carmine Disbrow, president of the Jersey City Police Officers Benevolent Association, strongly objected to the judge’s attack on the officers. Said Disbrow, “Judge Royster’s comments seem to offer an undeniable bias against law enforcement, including those who were forced to act in defense of their own lives!” Referring to Officer Santiago’s own murder at the same location only two days earlier, Disbrow added, “If the officers hadn’t responded the way they did at that scene, there is little doubt that this criminal would have succeeded in taking another police officer’s life.”

Court records in the case describe Highsmith’s weapon as a “sharpened six-foot fencepost”. Highsmith’s defense attorney, Mary Ciancimino, however, attempted to downplay her client’s assault on the officers, describing the fence post as a mere “stick”. Said Ciancimino, “He was scared so he picked up this stupid stick.”

“To insinuate that this incident was anything more than an attempt to kill a cop, is insulting to law enforcement and only invites more bad actors to show contempt for anyone that wears a badge” – Carmine Disbrow, President of the Jersey City Police Officers Benevolent Association

Disbrow, however, found that characterization, and the judge’s attack on the officers shameful. “To insinuate that this incident was anything more than an attempt to kill a cop, is insulting to law enforcement and only invites more bad actors to show contempt for anyone that wears a badge.”

What can you do?

Judge Martha T. Royster is a judge on the Vicinage 6 Superior Court in New Jersey. Royster was appointed to the court in 2011 by Governor Chris Christie, and is up for reappointment in 2018. Those wishing to express their opinions regarding Judge Royster’s possible reappointment in 2018 are advised to contact Governor Christie’s office through that office’s online contact form.