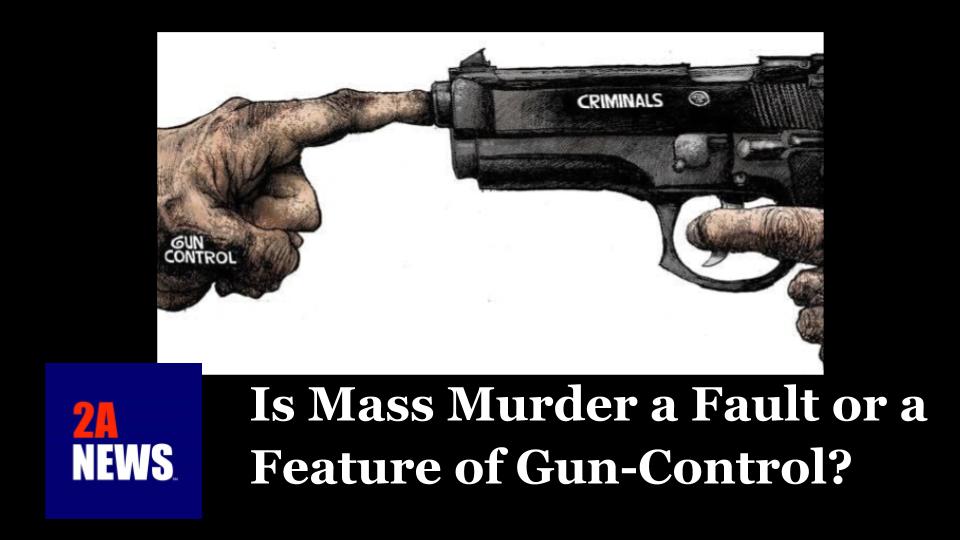 We had three mass murders here in the US during the last two weeks. The victims were attacked in “gun-free” zones where they could not defend themselves. With frightening consistency, gun-control advocates called for more of the same. ‘Gun-control failed, so we need more gun-control,’ they said. Are these failures of gun-control accidental, or are these mass murders useful tools for Democrat politicians and the mass media? The facts speak for themselves.

One of these attacks was in Gilroy, California. Gilroy is the pinnacle of gun-control in the United States. California is given an “A” rating for gun-control laws by the Giffords gun-control group. California is also ranked first in the nation for gun-control, so nobody does it better. California imposed magazine capacity limits that were supposed to keep us safe from mass murderers. California has one-gun-a-month laws that we were told would keep us safe from crazy murderers. California has red-flag-laws and age restrictions on honest gun owners. In fact, most of the people at the festival in Gilroy are routinely disarmed in public since concealed carry licenses aren’t routinely issued in Santa Clara County. In addition, the Gilroy Garlic Festival was a “gun free” zone, so the few concealed carry license holders in California were turned away. Visitors were even wanded, so there were no knives allowed at the festival. We were told that the police would keep us safe now that we are disarmed.

The murderer entered the festival by cutting through a chain-link fence. An $8 bolt cutter defeated the best security that California politicians can provide. With three people dead and 15 disarmed people wounded, California politicians immediately called for more of the same. The same state that has open borders and open drug markets says that gun-prohibition laws will keep criminals from having guns and hurting us. Evidence says otherwise.

With the failure of 22 thousand firearms regulations, the best the gun-control
politicians could do was say the next line of ink on paper would somehow be different.

California politicians proposed to outlaw semi-automatic firearms. Well..sort of. There will be exceptions for police and the security details who protect the families of politicians. This ban is also a bad idea for other reasons. Note that the ban would disarm licensed concealed carry holders. These gun owners are some six times more law abiding than the police. When they do have to use their gun in self-defense, these licensed gun owners are about five times more accurate than the police. Politicians say we’ll be safer once they are disarmed and only the police have guns..just like we were in Gilroy, California.

The mass media and anti-rights politicians
use mass murder as an excuse to call for
more of the policies that failed.
Those failures get us killed.

The murderer in El Paso attacked a gun-free mall. The murderer in Dayton attacked a nightclub area where many gun owners go disarmed. When the murderer’s politics are unknown, the media speculates and blames President Trump and the honest gun owners. When the murder actually puts out a Socialist manifesto, then the media says they don’t have enough facts to reach a conclusion about the murderer’s motive. The media blindness goes so far as to ignore the “mass murder” that happens every weekend in our Democrat controlled cities. The media also remains silent about the virtue of armed defense despite the millions of cases in the US every year where honest gun owners save lives. No wonder we don’t trust CNN.

With its sensationalized reporting
of mass murders,
the media does more harm than good.

We had to coin a new term called “celebrity murderers”. These mass murderers kill to get their name in the paper. Unfortunately, it works, and a billion dollars of publicity brought us more murderers time after time. We’ve had over 88 attempted and actual murder cases where we know the attackers modeled their behavior on the murderers at Columbine High School. These crazy murderers want recognition, and the media is their tool to become an instant rock star. Rather than blame themselves for the next murders, the media and gun-control politicians blame honest gun owners.

Shame on the dishonest media and politicians for telling such lies. Shame on us for believing them