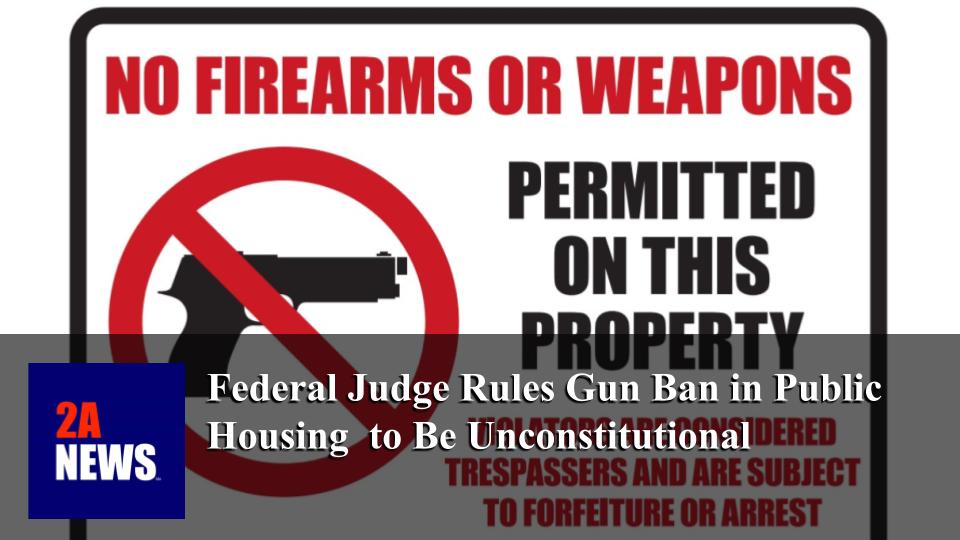 U.S. District Judge Phil Gilbert ruled that the ban was a violation of residents’ Second Amendment right to own a firearm for lawful purposes.

Gilbert issued a permanent injunction against the East St. Louis Housing Authority’s (ESLHA) ban on firearms possession by residents of government subsidized public housing and thus granting a victory to the Second Amendment Foundation, which sued the town in 2018 over the ban.

The lawsuit was filed on behalf of an “N. Doe” resident who wished to protect her identity, because she is, according to the lawsuit, “hiding from a violent domestic abuser. SAF was joined by the Illinois State Rifle Association. They were represented by Glen Ellyn, Illinois attorney David Sigale.

“We are delighted with the judge’s decision, which we hope sends a message to other municipal governments that they can’t try to sneak around the two United States Supreme Court victories that SAF and its attorneys were involved in to further their efforts to ban legal firearms ownership,” said SAF founder and Executive Vice President Alan M. Gottlieb.

Gottlieb noted, “Our attorney in this case, David Sigale, holds the record for the most gun rights court victories in the legal profession.”

“This isn’t the first time we’ve had to challenge such a regulation,” said SAF founder and Executive Vice President Alan M. Gottlieb. “It is simply unacceptable for citizens living in public housing to be denied their basic right to have a firearm for personal protection, and in this case, it was unconscionable.”

The court order of final judgment ruled that the plaintiff’s rights are were violated under the Second and Fourteenth amendments due to a requirement that no firearms be possessed on the property as a condition of lease.

“This situation was made even more outrageous considering what has happened to Ms. Doe while living at her home,” Gottlieb noted, referring to the lawsuit. “We’ve explained how she was beaten and raped in January 2017, and her children stopped the attack only by threatening to use a gun. On two other occasions, Ms. Doe had to call police due to shootings in nearby residences. When the housing authority threatened to terminate her lease due to the gun in her residence, they insisted that the building is safe, so she doesn’t need a gun.”

“This kind of gun prohibition extremism has no place on American soil,” Gottlieb observed.  It’s just one more example of how the Second Amendment Foundation is winning firearms freedom, one lawsuit at a time.”

The lawsuit was filed in U.S. District Court for the Southern District of Illinois. View Court Order here.