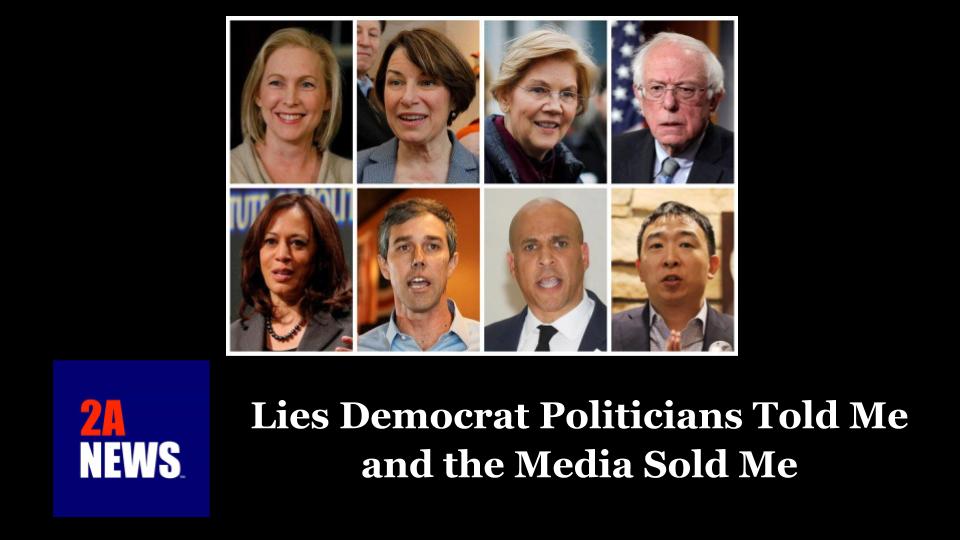 The Democrat candidates for president are issuing extreme proposals like a bunch of drunks who stayed at the bar too long. Now, the candidates are competing to see who can come up with the wildest schemes as they vie for media attention. Beto O’Rourke got some press coverage when he called for forced confiscation of mid-range semi-automatic rifles. Desperate for attention, Kamala Harris and Cory Booker flashed some confiscation of their own. None of the Democrat candidates criticized firearms confiscation. Are these extreme proposals appealing to the Democrat base, or is there a larger motivation?

The rifles the Democrats demonized are average in power, average in size, but above average in popularity. These “evil black rifles” are significantly smaller and lighter than full sized battle rifles. Unlike automatic weapons, these civilian guns fire a single shot each time the trigger is pulled. That is why they are not used in combat by the military. In fact, these guns are less powerful than most hunting rifles used across the US.

The news media will shout that these “weapons of war” were used by mass murderers to hunt our kids, but that isn’t true. Though it is true, it isn’t no good news that mass murderers in the US were more lethal when they used other guns.

Unfortunately, public perception is political reality. We think mass-murders are a hundred times more common than they really are. We think that suicide with a firearm is only a third as common as it really is. Our view of reality has been wildly distorted by news media that sensationalizes rare events.

To be fair, the “evil black rifle” is more powerful than the 22 caliber rimfire guns that most of us used when we first learned to shoot. As one of my instructors said, the AR and AK rifles are girl-guns. With an adjustable stock and their mild recoil, these are the guns we give to teenagers and to our girlfriends when they want to step up from the rimfire guns they shot as kids.

Facts matter. About a million of us will use a firearm in self-defense each year. Most of us will be attacked outside our home. About 20 million of us have concealed carry permits to protect ourselves and our families when we are in public. Back at home, a number of us will use long guns to defend ourself. The intruder almost always runs away when they face an armed defender, and that is a good thing.

The truth is that Democrat politicians need to scare urban women into voting for them. The Democrats need to convince us that Republicans are handing out guns on the street corner and our kids are dying of gunshots. In fact, our kids are more likely to die from suicide, from drugs, and from alcohol than from assault with a firearm.

Public perception is reality in politics. Democrat candidates claiming they will save our children might get them elected.. as long as the press plays along with the lie.

It might work as a political strategy, but the media’s distortion distracts us from real solutions to save our children.

If we really wanted to save our children,
then we’d get married before they were born..
and we’d clean up the corruption in our inner cities.

The media wants us to think crime is everywhere, while most counties in the US won’t have a single murder this year.

Crime is local. The press is wildly unequal in its coverage of violent crime. In a month, more people are shot and killed in Chicago than are killed each year by mass murderers in our public schools. Mass murder is widely covered in the news, but the news media ignores the political failure in our inner cities.

Our violent inner cities are run by Democrats. The press will ignore that fact as well.