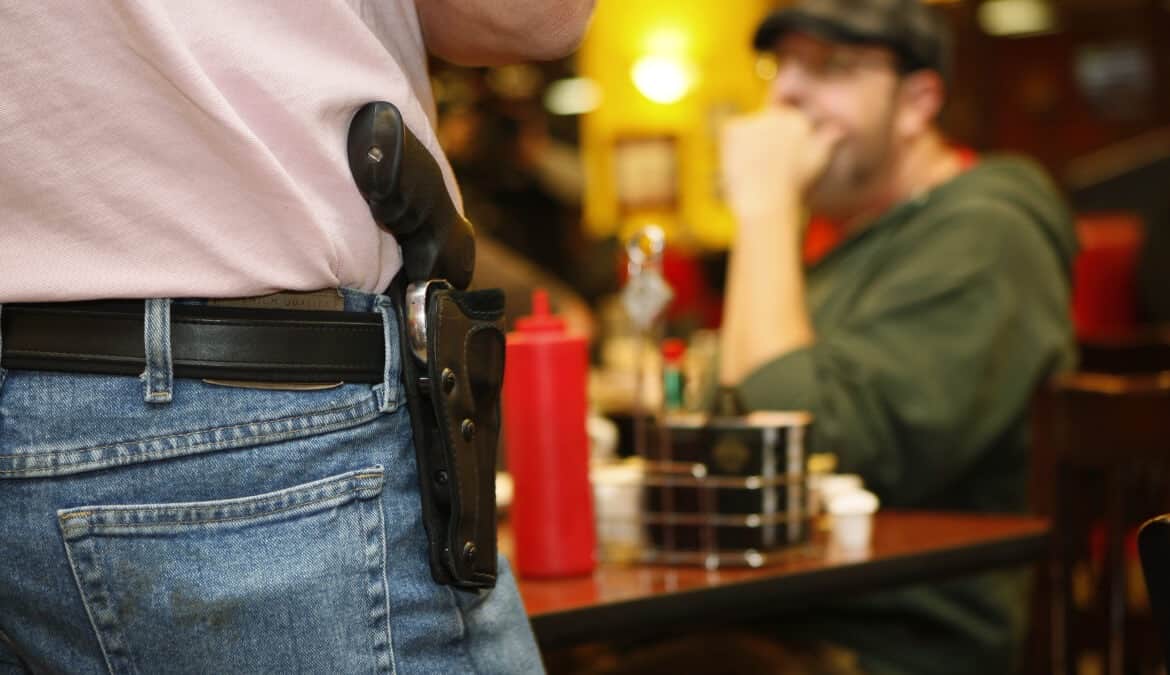 The South Carolina House of Representatives approved a bill on Wednesday allowing residents to “open carry” a gun without a permit. The bill passed on a 64-46 vote, despite contentious debate and claims of improper “fast-tracking” by Republicans. The bill heads now to the state Senate for their vote today.

“Open Carry”: The constitution is your permit

The bill’s sponsor Rep. Mike Pitts (R-Laurens) explained the purpose for the bill; to codify into state law a freedom explicitly granted under the United States constitution. “The bill is a very simple bill. It gives you the ability to ‘keep and bear arms’ without having to be permitted by the country.”

Within the United States, “Open carry” refers to the practice of openly carrying one’s firearm in public, as distinguished from concealed carry, where firearms cannot be seen by the casual observer.

The practice of open carry has seen an increase in the U.S. in recent years. There have been a number of organized events in recent years intended to increase the public awareness about their constitutional right to openly carry their firearm. Proponents of open carry point out that, while criminals usually conceal their weapons, a law-abiding citizen should not fear to openly display their firearm.

State laws regarding the right to “open carry” vary widely. Four states, including the Territory of the U.S. Virgin Islands and the District of Columbia fully prohibit the open carry of handguns. On the other side, twenty-five states currently permit residents to openly carry a handgun without a permit. Sixteen states require some form of permit or license, and the remaining five states, while they do not prohibit the practice per-se, defer to local municipalities to set their own policies.

Democrat representatives predictably opposed the bill. Rep. James Smith (D-Richland) vented his frustration with the bill, railing, “The legislative history of this bill is an embarrassment!”

Democrat lawmakers had attempted to undermine the bill by introducing into the bill several amendments they knew Republican lawmakers would oppose. One amendment called for private gun buyers to complete a background check before purchasing a gun from a private seller. Another amendment would have required gun owners to complete a mandatory, state-administered gun-safety course, before being permitted to own a firearm.

Failing in their efforts to poison the bill, Democrat lawmakers then attempted to subject the House to endless debate on the clearly constitutional issue. Ultimately, House Republicans invoked a procedure to limit further debate. Stymied by that move, Democrat representatives then unsuccessfully attempted to prevent the House from voting on the bill.

The bill comes in the wake of increased efforts by gun control activists to infringe on the right to keep and bear arms. Many S.C. residents are understandably frustrated by a failed background check system that allowed Dylann Roof to buy a pistol two months before he murdered nine parishioners inside a Charleston church.

Perhaps reacting to that 2015 tragedy, several Republican lawmakers crossed the isle and voted with democrats against the measure. Rep. Bill Crosby (R-Charleston) derisively referring to South Carolina’s long tradition of defiant gun ownership, scoffed, “All it does is it makes these good ol’ boys, who like to have guns strapped to their hips, not conceal them.” Crosby stated his hope that the S.C. Senate simply allows the bill to “languish in committee”, rather than doing their job and voting on the bill.

If the bill is approved by the Senate, a resident who is legally allowed to buy a gun may do so and carry it openly without a state-issued permit. The state’s concealed-carry system will remain in place, to permit residents to obtain a concealed-carry permit to use when traveling to another state. Carrying a firearm onto school property and into an airport will still be prohibited.

Related bill approved: Paramedics and fire-fighters to be allowed to carry guns

The House approved a related bill that will allow first responders such as paramedics and firemen, who complete a one-week training program, to carry a personal or issued firearm onto school property. This bill now also moves on to the Senate for a vote.