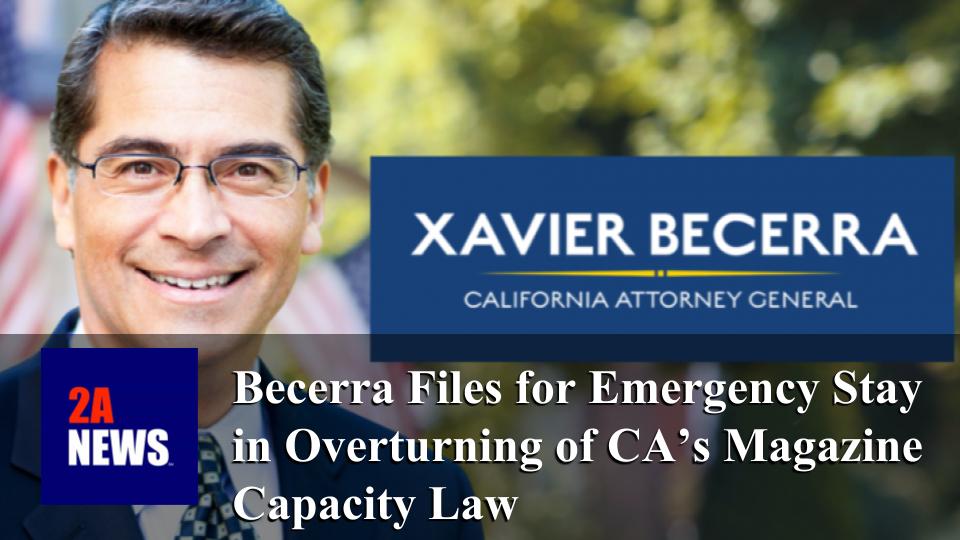 On April 1st, a mere three days after Federal Court Judge Robert Benitez ruled California’s magazine capacity law unconstitutional and granted summary judgment to the plaintiffs, Attorney General Xavier Becerra filed several documents requesting an emergency stay in the vacating of the unconstitutional law, pending an appeal to the 9th Circuit.  In other words, he is appealing the decision and is asking the courts to, at least temporarily, undo Judge Benitez’s ruling.

In filing for the emergency stay, Becerra says the following:

“Even if this Court, or the Ninth Circuit, ultimately issues a stay pending appeal, the State will suffer irreparable injury if LCMs are permitted to flow into the State in the interim.”

I find it quite entertaining that the Attorney General is claiming that there will be “irreparable injury” to the state by allowing “LCMs” (large capacity magazines) to enter the state, when the one of the reasons Judge Benitez granted summary judgment in the first place was the fact that the state was unable to prove in the slightest that a magazine ban prevents harm, and would thus, possibly, be a reason to allow a law which clearly violates the Second Amendment.

Becerra continues further on in the application, saying:

“Defendant brings this ex parte application for good cause on the ground that the State will suffer irreparable and immediate injury until a stay pending appeal is issued.  California has restricted the acquisition of LCMs for nearly two decades, and until the Judgment is stayed pending appeal, individuals will be free to acquire new LCMs, and there is evidence that sales have begun already.”

The fact that Becerra points to the longstanding prohibition in California against the importation of “LCMs” as part of his reasoning for the emergency stay should make one wonder if he even read the ruling in which the law was found to be unconstitutional.  Specifically, the following two remarks from Judge Benitez’s ruling would directly apply to the entire basis of the emergency stay request.

“The AG’s evidence demonstrates that mass shootings in California are rare, and its criminalization of large capacity magazine acquisition and possession has had no effect on reducing the number of shots a perpetrator can fire.” (page 51, line 16)

“No case has held that intermediate scrutiny would permit a state to impinge even slightly on the Second Amendment right by employing a known failed experiment. Congress tried for a decade the nationwide experiment of prohibiting large capacity magazines. It failed. California has continued the failed experiment for another decade and now suggests that it may continue to do so ad infinitum without demonstrating success. That makes no sense.” (page 59, line 14)

I’m no lawyer.  The only law classes I have ever taken were nearly 30 years ago when I was getting my criminal justice degree from CSU Sacramento.  But even this dumb former street cop is smart enough to know that using a failed argument, one that was specifically cited in the ruling of a case in one direction, really does not hold much weight when trying to argue that ruling should have gone the other way.  That said, this is California, and we do have a plethora of liberal activist judges, so I would not be in the least bit surprised if Becerra is able to get this emergency stay granted.

In the short term, a stay placed on the ruling, and the pending appeal to the 9th Circuit Court of Appeals is bad news for California gun owners.  It would mean that we are still in the same boat that we have been in since 1994, and that being we are unable to legally purchase standard capacity magazines.

BUT this appeal will be good news for the entire nation, because if the 9th Circuit hears the case and agrees with Judge Benitez, it will only strengthen the case law standing of the original summary judgment ruling.  If the 9th Circuit disagrees with the ruling, then the case will be appealed to the Supreme Court, which I would hope would hear the case so as to finally establish some continuity to the various circuit and district court rulings on the matter, and the fact that the Supreme Court continues to grow more constitutionally conservative with the appointment of new judges, this would be a good thing for gun owners across the country.