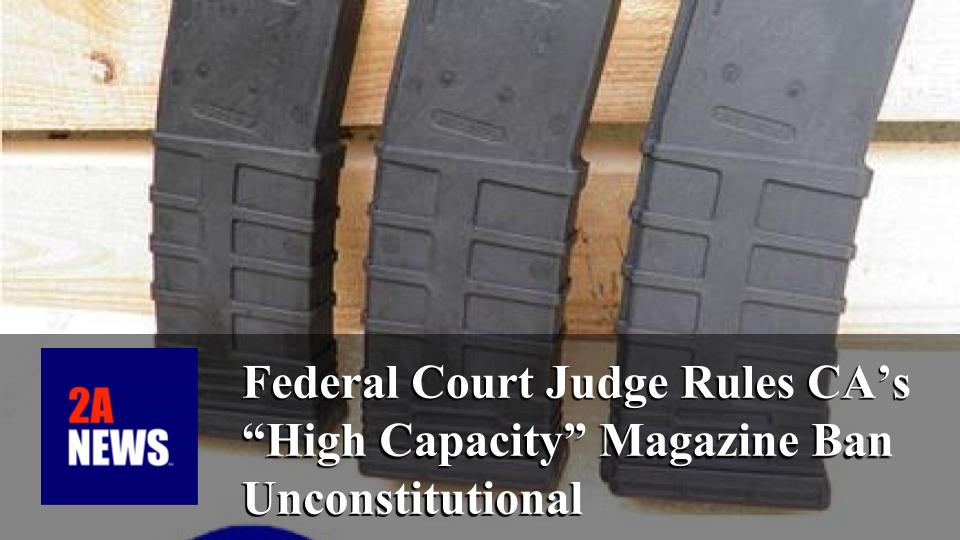 In a huge show of support for both the Bill of Rights, and for California gun owners, United States District Court Judge Roger T. Benitez found for the plaintiffs and granted summary judgment in the case of Duncan v. Becerra, which challenged California’s “high capacity” magazine ban.

The complete ruling as written by the judge is lengthy, and quite detailed.  The judge does an excellent job of laying out his reasoning, and discusses other previous supreme court decisions that justify his finding.  Rather than read the whole 86 page document, let me just offer the conclusion in it’s entirety.

Magazines holding more than 10 rounds are “arms.” California Penal Code Section 32310, as amended by Proposition 63, burdens the core of the Second Amendment by criminalizing the acquisition and possession of these magazines that are commonly held by law-abiding citizens for defense of self, home, and state. The regulation is neither presumptively legal nor longstanding. The statute hits at the center of the Second Amendment and its burden is severe. When the simple test of Heller is applied, a test that persons of common intelligence can understand, the statute fails and is an unconstitutional abridgment. It criminalizes the otherwise lawful acquisition and possession of common magazines holding more than 10 rounds – magazines that law-abiding responsible citizens would choose for self-defense at home. It also fails the strict scrutiny test because the statute is not narrowly tailored – it is not tailored at all. Even under the more forgiving test of intermediate scrutiny, the statute fails because it is not a reasonable fit. It is not a reasonable fit because, among other things, it prohibits law-abiding concealed carry weapon permit holders and law-abiding U.S Armed Forces veterans from acquiring magazines and instead forces them to dispossess themselves of lawfully-owned gun magazines that hold more than 10 rounds or suffer criminal penalties. Finally, subsections (c) and (d) of § 32310 impose an unconstitutional taking without compensation upon Plaintiffs and all those who lawfully possess magazines able to hold more than 10 rounds.

Accordingly, based upon the law and the evidence, upon which there is no genuine issue, and for the reasons stated in this opinion, Plaintiffs’ motion for summary judgment is granted. California Penal Code § 32310 is hereby declared to be unconstitutional in its entirety and shall be enjoined.

As a recently retired career cop who spent his career applying case law to situations on a daily basis, I absolutely concur with the judge’s decision, but that does not take away from my surprise that it was reached.  Sadly, the one thing that past court rulings on gun control laws in California has taught me is even if a law is blatantly unconstitutional, somehow California gets them pushed through.  This ruling today is a huge step to correct those past mistakes.

As a California resident, one who is not personally affected by the ruling today as my LEO status rendered me immune from the law, I am not going to lie, I am ecstatic!  This is a huge win for law abiding gun owners.