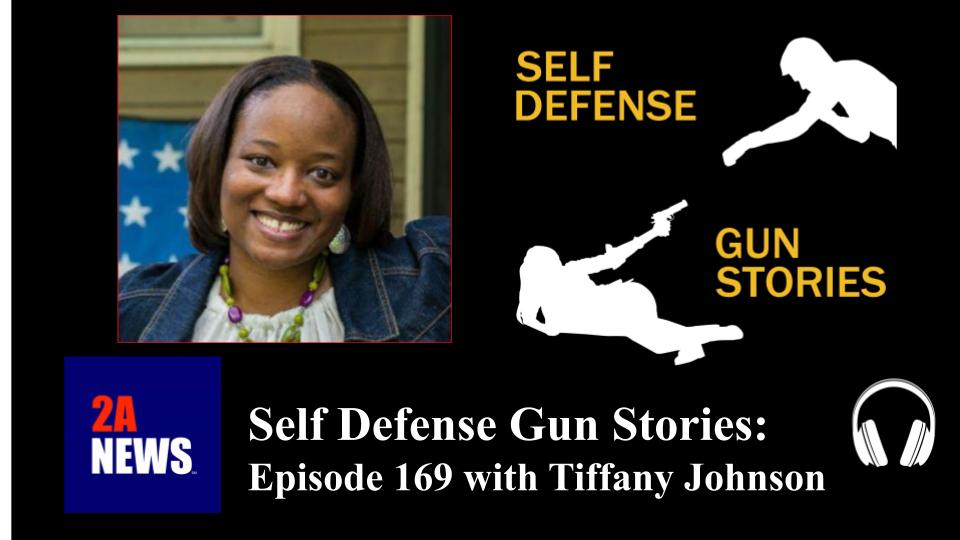 Rob- We received four more ratings and one more review on iTunes this week (105/59). Please go to the iTunes store where you subscribe to podcasts and give us a rating and leave a comment.

Tiffany- We’ll talk about recent examples where gun owners were in a life threatening situation. Were they lucky, or did they have good habits? We give you the links back to the original news article in our show notes. Our first story took place last week in Franklin, Kentucky.

You’re working in your cell phone store. It is about 7 at night. Customers come in and want help with their phones or to add money to their accounts. Some pay by credit card and some pay with cash. Two men walk in and before you know it, one of them is pointing a gun at you. Your attacker is wearing a hoodie and a mask. He demands the money from the till.

You’re armed. You draw your firearm and the two criminals run from the store. Neither you, nor any other customers or employees are hurt. You call the police and show them the security videos.

Tiffany- (What did our defender do correctly?) Our defender did a number of things to save his own life. We know he was armed. We know he had his firearm on his body rather than keeping it in a lock box in the back office. We know he drew his firearm when he faced an immediate, unavoidable, lethal threat. We know he did not chase his attackers when they ran down the street. He checked on his employees and his customers. He had a video security system in place. He called the police and gave a statement.

Rob- What would you tell your students to do?

Rob- How can we draw against a drawn gun?

Tiffany- Don’t do that. Wait your turn. Our attacker is distracted.

Rob- How would you practice shooting at close range as you move?

Tiffany-  Movement doesn’t have to be dramatic or extreme. Simply practicing a subtle sidestep can make a huge difference. Also, for average everyday folks who aren’t putting 10K rounds downrange every year, it might be better to think about move-shoot-move as opposed to moving while shooting. Simultaneous moving and shooting can require more coordination and proprioception than most people have habituated, so the safer bet is to step and shoot rather than shooting while running, etc. Also, more practical in terms of what’s normally allowed at a gun range.

Rob- Our defender talked to the police. He had video evidence in his favor. What should we tell the police, and what should we wait for our lawyer to say?

Tiffany- Tell the police generally that there was an attempted robbery, that the robbers pointed a gun at you, and that you were forced to defend yourself and your customers. Then request medical attention and assure the police you’re willing to cooperate further after you’ve had a chance to consult with an attorney.

Rob- Is there more?

Rob- Are you armed when you go out with your family in public?

Your daughter found a used cell phone she wants to buy. She sets up the exchange, but you decide to go with her. It is dark when you get to the address. You ring the bell but none answers. Two men walk up as you go back to your car. One of them has a gun in his hands and your other attacker has a knife. They demand your money and your cell phone.

You have your Utah concealed firearms permit. You’re armed tonight. You hand over your wallet and your phone. Then you draw your firearm and shoot [at] your attackers. Your attackers run away. You drive to safety and call the police.

The police take your description and find your attackers. Their gun was a BB gun. They are charged with two counts of aggravated robbery and intentionally giving false information to a police officer. They have previous convictions for shoplifting and failure to appear in court. There were open warrants for their arrest.

Tiffany- Our defender went with his daughter because he didn’t want her to meet strangers in a strange place at night. It’s a good thing he didn’t let her go by herself, although he probably wishes he had urged her to schedule a daytime meeting rather than a nighttime meeting. He had a gun.  He brought the gun. He carried it on his person rather than keeping it in the trunk of his car. He got to safety after the attack. He called the police and filed a report. However, I’m a little leery of his decision to fire at these robbers as they were running away. According to the article, the encounter was over and the robbers were clearly leaving. They posed no further threat to the dad and his daughter. The dad said he fired “to protect others.” That’s a tough call, in my opinion. He didn’t hit either one of the robbers, but his bullets did go somewhere. He claimed he was protecting others, but his actions might have endangered others. He’s lucky he wasn’t charged, and he’s even luckier that his stray bullets didn’t hit an innocent bystander.

Rob- That is a lot to get right. He had to draw his firearm from concealment, probably on the move, and shoot outdoors at night. We don’t learn to do that in our first class..or even our second class.

Tiffany- Firearms safety. Marksmanship. Concealed carry. Self-defense on the move. use of lethal force, and low light. Being in the dark meant that our victims were harder to shoot too, so it is a mixed situation.

Rob- How long does that take?

Tiffany- It takes practice. You won’t know how to safely handle a gun after you take the class until you practice on your own. You have to practice at home with an empty gun..we call it dry practice, to learn how to draw. Put in ten minutes of practice every other day and you’ll have it in a month. The more you practice, the more comfortable you’ll be with safe gun-handling, and the less brain power you’ll need to spend on executing those motor skills under stress. That frees up more brain space to focus on staying calm, being mentally nimble, thinking quickly on your feet, and successfully negotiating a life-threatening emergency.

Rob- What would you like us to do when we sell something online?

Tiffany- Make the trade at the police department parking lot at noon. I’m serious. Call the local police and ask them if they have a location with video surveillance so you can safely make the trade.

I don’t know how old the young woman was, but if she was over 18, then she could carry a firearm in Utah. She is going to be out on her own soon and has to provide her own protection.

Police say the intruder lives nearby and had tried to break into another home nearby when he left yours.

Tiffany- Our defender had a defensive tool, in this case a rifle. He was able to get to it quickly. He defended himself, but didn’t face an immediate, lethal and unavoidable threat, so he didn’t shoot. That shows good judgement. He called the police and gave a statement.

Rob- We talk about contacting our lawyer when we have to use a gun for defense. Would you give the same advice even if we don’t shoot the gun?

Tiffany-  Absolutely. Using a gun against another human being is fraught with potential legal perils, regardless of whether we actually fire the gun. It’s always a good idea to contact an attorney, especially early after the encounter when outcomes are still uncertain and emotions are running high.

Rob- What would you like us to do if we hear our back door kicked in?

Tiffany-  Our defender in this case did an excellent job of being prepared with a readily accessible defensive tool that he was able to employ without injury or harm. That’s a win for all involved.

My only caution here would be about holding someone at gunpoint. We are not the police. Obviously it’s a homeowner’s right to do that if he/she chooses, but I have trouble seeing the advantages of that strategy. Let the police do their jobs. You just told this person to leave your house a few minutes ago. You’ve armed yourself because you fear this person poses an immediate lethal threat. If those things are true, then it doesn’t make sense to force the person to remain in your home at gunpoint.

It is after midnight as you’re working at a small market. A man walks in and pulls a gun from his pocket. The robber points the gun at you and demands the money from the cash register.

You have your license to carry a gun in your store. You’re carrying your firearm concealed. You step away from the cash register and draw your gun. You shoot your attacker several times. Your attacker runs from the store. You call the police and give a report when they arrive a few minutes later.

Your attacker was found lying on the sidewalk a block away and was taken to the hospital in critical condition.

Tiffany- Our defender had a plan. He had to apply for a permit to own his firearm. He had to apply for a permit to keep it at work. He carried it on his body. Our defender recognized a lethal threat and defended himself. He shot his attacker and didn’t shoot innocent bystanders. He stayed at the scene rather than chase his attacker down the street. Our defender contacted the police. And, wearing a holster gave the defender a safe place to put his gun before the police arrived.

Rob- That is a lot of preparation. Did you notice anything else?

Tiffany- I was surprised that the article didn’t show security video. Maybe it was there, but wasn’t made public.

Rob- What do you tell your small business owners to do?

Tiffany- Empty the cash register during daylight hours. If possible, have more than one employee in the store at a time. Have both of them armed and trained so they work together in their mutual defense. I also want them to add those cameras.

Rob- What should we tell the police?

Tiffany- Again, just give police very basic, general information. A man pulled a gun and demanded cash, my life was in danger, I had to defend myself. Then I’d assure police that I do intend to cooperate fully, but first I really need medical attention, and I need to speak to an attorney. Always ask for medical attention even if you don’t think you’re hurt.

Exit- Rob- that wraps up this episode. Tiffany, thank you for helping us again. Where can we learn more about you?

Rob- After you look at Tiffany articles, then leave us a message on the podcast facebook page.

Tiffany- We share this podcast with you for free.  Please share the podcast with a friend and give us a rating on I-Tunes and Stitcher. We’re also available on Google Play Music,Tunein, Spotify, and iHeart Radio.