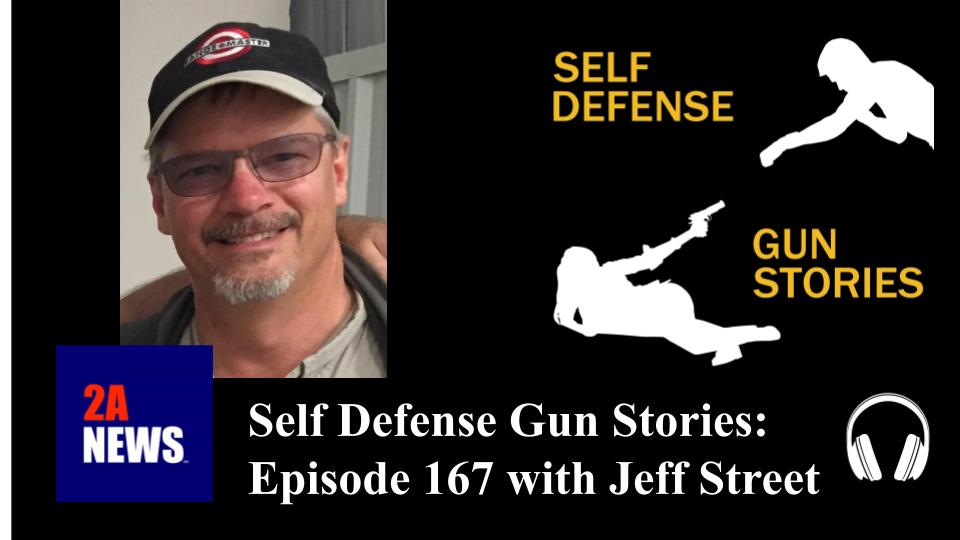 Rob- We received 5more ratings and 2 more comments on iTunes. Please go to the iTunes store where you subscribe to podcasts and let new listeners know that this podcast is worth their time.

Jeff- We’ll look at examples where gun owners were in a life threatening situation. Were they lucky, or did they know what to do? We post the links back to the original news article in our show notes.  Our first story took place last week in Salina, Kansas. (Sal-line-ah)

You and your daughter are at home on a Thursday night. You hear a crash from the other end of the house and walk toward the sound to see what happened. You see a stranger standing in your house. Your front door is broken, and the man is grabbing his foot that is bleeding on your floor.

You tell him to get out, but he says he’s being chased by other people, and the stranger tries to close and lock your front door.

You shout for your 12 year old daughter to grab your gun, and you stay between the intruder and your daughter. A moment later your daughter brings you your gun. You tell the stranger that you’ll shoot him if he comes any closer. Then you call the police.

The police arrest the stranger and take him to the hospital for treatment.

Jeff- Let’s start with what our defender did correctly.

Our defenders had a plan. Dad and daughter talked about what to do if there were an intruder in the house.

Dad stayed between the intruder and his family.

He asked his daughter to get his gun, his self-defense tool.

He retreated, because his self-defense tool will work at a distance.

He told the intruder that he would shoot if he came closer.

He called the police.

The police came and no one got shot.

Rob- All that is true, but this story seems strange.

Jeff- I’ll bet the intruder was on drugs. He might have turned violent, but he didn’t, so our good guy didn’t have to shoot.

Jeff- Have your defensive tool with you. Have your phone with you. It would be nice to a tourniquet with you too.

Once you see a bad guy in your home. Back away and call the police.

Rob- Anything else you notice?

Jeff- What happened to the gun when the police arrive? This is what I want you to do if you don’t have a holster. I’m concerned that his 12 year old daughter had access to his firearm. I’d rather the gun was on his body and secure.

Rob- That is important.

Jeff- Please secure your firearm when it isn’t on your body. And that’s enough for now. Our second story happened last week in Nicholasville, (Nic-O-Lass-Vill) Kentucky

You’ve been here before. It is an hour after dark on a Saturday night. You’re delivering pizza to a hotel. You pick up your carry pack and walk toward the front door. A man and a boy walk across the parking lot to meet you. A moment later you notice that the man has a gun in his hand. He tells you to give him your wallet and cell phone.

You’re armed. You put down your pizza boxes. You also reach for your gun and shoot your attacker. Your attacker shoots back as he hobbles to his car and drives away. The police arrest your attacker and his teenage accomplice when he pulled over to treat his injuries.

You and the rest of the people in the parking lot are unhurt.

Fallacy: “They came out of Nowhere”.

Jeff- Look at what happened. Our good guy had his hands full of packages when he was attacked. He was in a public place with other people in the parking lot. He was attacked by two people after dark. That is a lot to overcome.

The good news is that our defender was armed. He had a plan.

Rob- What would you like us to do if we were in a similar situation?

He didn’t stand there handcuffed by the pizza boxes while he was searched and robbed of his wallet, his phone, his keys and his gun. It sounds like our defender was aware of the people standing near or behind his attackers, and our good guy didn’t shoot anyone who didn’t need to be shot. Our good guy stopped shooting as the bad guys ran away.

Our defender also stayed at the scene to talk to the police.

Jeff- I wonder if the delivery driver could have parked right in front of the main entrance.

If you’re attacked, then hand the pizza boxes, or your groceries, or your purse, to your attacker. Now his hands are full. Move as you draw and move as you shoot. Keep moving until you have a car between you and the threats. Scream for help. That will get everyone to look at you and you want a lot of witnesses. Don’t worry about saying words as you yell, just make noise. When the immediate threat has gone away, then shout for everyone to call 911 as you put away your gun.

Rob- I’ve been on the road for the last few weeks. Are parking lots dangerous?

Jeff- They are the hunting grounds of choice for criminals because the robbers can get away so easily.

Rob- It sounds like our defender was carrying on body and had to present his firearm from a holster. Let’s say that I have my concealed carry permit. What happens next so that I know how to quickly and reliably present a firearm in a stressful situation?

You’re at home on a weekday morning. You hear someone banging on your front door. The stranger says to open up because he lives here and needs to get inside. You’re the homeowner, and you tell the stranger to go away. A minute later, you hear a window open at the side of your house, and a stranger walks into your home. You’re armed. You stay between the intruder and the other residents in your home. You shout for the intruder to leave. Your gun is out and you say you’ll call the police. The intruder says, “uck the police”, and lunges at you. You shoot the intruder three times and then back away. The intruder backs up. You call the police.

The police say that the intruder tried to break into another home on the next block and stole a car.

Jeff- Our defender was armed. He had a dog that was probably barking at the intruder. The defender kept the other occupants of the house from being attacked. He called police. He did not close with the attacker but defended himself when he was attacked. Our defender stopped shooting when the threat stopped. The defender retreated to safety, and then stayed at the scene to talk with police.

Rob- Is there something else our defender might have done?

Jeff- Lock your windows and doors. It would be great to have an alarm. It sounds like there was another adult in the house. It would have been better if she had been armed as well. Our defender could have been shot if our defender was armed. That is why we want to retreat to a safe room with the rest of the occupants and call the police.

Rob- The intruder claimed he lived there.

Jeff- We don’t know if he said that as a was to get the occupants to let him in, or if the intruder was hallucinating. Most assailants are intoxicated, so he could have been drugged or crazy.

Rob- Can you think of anything else we should know before we go on?

Jeff- Home invasions happen pretty often. I like having a security alarm as well as two alarm dogs.

Also, it isn’t clear that our defender had a holster with him. Don’t have a gun in your hands when the police arrive. The other people in the house can meet the police and tell them the gun has been put away.

It is early in the morning, and you’re standing outside your home with your girlfriend and your nephew. Your mom is inside the house. Three young men walk up to you. They are wearing masks. They tell you to hand over your wallet, and one of the young men points a gun at your family. He shoots at your house and your car.

You’re armed. You step to the side and present your firearm. You shoot the armed gunman in front of you, and then you shoot the other two attackers. Your attackers run, but you see one of them fall. You and your family retreat into your house. You stay inside and call the police. None of your family is hurt.

The police said your three attackers were 15 and 16 years old.

Jeff- The evidence we have so far looks like a clear case of self defense, however some community leaders are second guessing our defender without any evidence supporting their claims.

We don’t know what an attacker will look like. It sounds like this defender was armed and carrying on his body. He protected his family. He stopped the thereat and then retreated. He called the police and then gave a statement.

Rob- You’ve called the police. What happens next?

Jeff- Get your family to a safe location. In this case, inside your home. Stay on the phone with 911. Put your gun into its holster so it isn’t in your hand.

Rob- This has just been the worst day you’ve ever had. What do you say to the police?

Jeff- Don’t say a lot. Say this. I was attacked. My attackers were armed and I had to defend myself and my family. I think they shot at me, so there might be shell casings and bullet holes out front. I’ll cooperate completely and answer all your questions after I talk to my lawyer.

Exit-  Rob- that wraps up this episode. Jeff, thank you for helping us again. Where can we learn more about you?

Jeff- Find me at Step by Step Gun Training in Naples Florida.  We provide group classes as well as custom training and weekend competition. Leave us a message on the Step by Step Facebook page.

Rob- After you look at Jeff articles, then leave us a message on the podcast facebook page.

Jeff- We share this podcast with you for free.  Please share the podcast with a friend and give us a rating on I-Tunes and Stitcher. You can also find us on Google Play Music,Tunein, Spotify, and iHeart Radio.