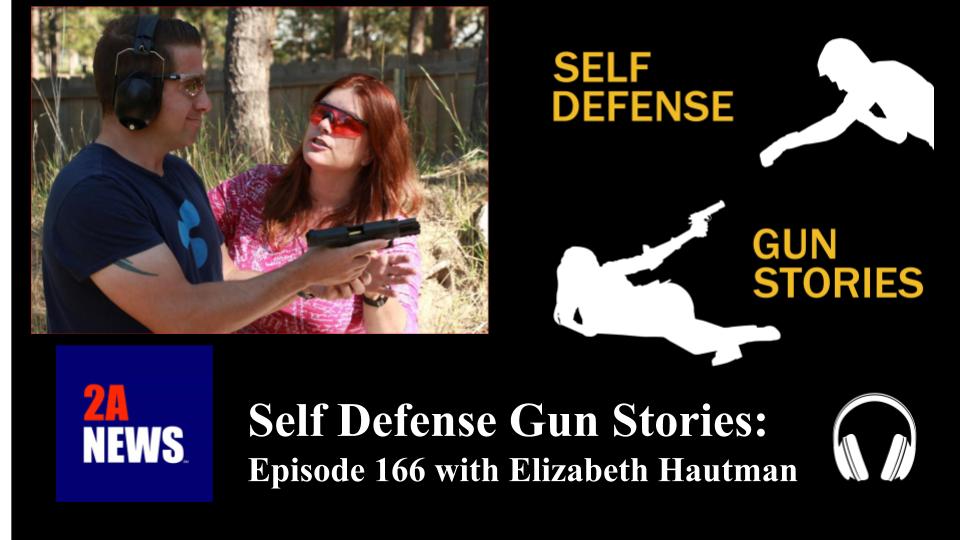 Rob- We received two more comments on iTunes. Thank you Jagger and Maaco. (94/56). Please go to the iTunes store where you subscribe to podcasts and give us a rating and leave a comment. You can share the podcast on Facebook from iTunes.

Elizabeth- We’ll talk about recent examples where gun owners were in a life threatening situation. Were they lucky, or did they have a plan? What should we do if we were in their place? We give you the links back to the original news article in our show notes.  Our first story took place last week in Daphne, Alabama.

Rob- First story-  Do you have a gun nearby at home?

You’re a 44 year old woman. It is Tuesday morning and you’re getting out of the bath. Your kids rush in and say that someone came into the  house, and that the intruder doesn’t belong there. You grab some clothes and confront a woman standing in your house. She used to live here, but doesn’t live here any longer. You back up to your bedroom and get your handgun from your dresser. Again you demand that the woman leave your house. She lunges for your gun. The attacker stops and runs away when you shoot her. You stop too, and call the police.

Elizabeth- This mom did a lot to save herself and her kids. She was armed. She protected her children when the intruder tried to disarm her. She didn’t chase the intruder, but stayed to take care of her kids. And, she called the police.

Rob- She was successful, but there are a few things we should do.

Elizabeth- Please lock your outside doors. Make the bad guy smash his way inside before they can get to your kids, and it doesn’t cost you a penny.  Have you gun in a secure rapid access safe where you children can not reach it. That costs about $100. Talk to your children so your entire family has a plan. Then I want you to practice the plan with your children. Do a practice intruder drill the same way you walk through a fire drill. We don’t want the children near the attacker, even if the attacker used to live in the same house.

Rob- When do you talk about that with your students?

Elizabeth-  It’s an important part of my class. We need to run drills with our family.

Elizabeth- I’d like you to carry on body with your gun in a holster. That way you don’t have to run away from the attacker and leave your children vulnerable as you go get your gun. Then again, I’ll give you a pass while you’re  in the bath.

Elizabeth- That is enough for now. Our second story happened last week in Coshocton County, Ohio.

Rob- Second Story-  Are you armed at a fast food restaurant?

You’re a 70 year old man and you drive into McDonalds for an early lunch just before noon. You’re standing in line when another customer starts threatening to stab other customers and the clerks behind the counter. You can’t believe it at first. Then you take the attacker seriously and start to step back. You notice that some of the customers are women with young kids. Some of the clerks behind the counter are only teenagers.

You have your Kentucky concealed carry license. Your license is good here in Ohio, and you’re armed today. You draw your firearm and tell the attacker to put down the knife and to stop threatening people. You tell him again, and now he turns and walks out of the store. There are people outside, so you follow the attacker. Again, you tell him to drop the knife before the police arrive.

The young man drops the knife. The police take him into custody a few minutes later. The police said you might have saved lives inside the restaurant..and saved the attackers life as well by getting him to drop the knife.

Elizabeth- Our defender might have saved a lot of lives. We don’t know if the attacker was on drugs, if he was out for money, or if he wanted to commit mass murder. No one expects to be robbed at McDonalds, but that is why we carry all the time and we carry on our person. The gun wasn’t outside in his truck or in his briefcase.

He presented his firearm and then used verbal commands to try and stop the threat. He followed the attacker because there were other innocent people outside.

Rob- What else did you see?

Elizabeth- Our defender had every right to shoot immediately. This time, the verbal commands stopped the threat. It could just as easily been that the attacker lunged at an innocent person and stabbed them before you could stop him. We don’t know, and we can’t know what the attacker will do.

We want to tell the innocent people to back away and call 911. We also want a few of the people who are talking to 911 to stay with us and tell us when the police are about to arrive. We want to re-holster our gun when they jump out of the police cars.

Rob- It sounds like the defender felt compelled to get involved. He couldn’t stand back and be a good witness.

Elizabeth- There were kids and teenagers at risk, and they can’t defend themselves. They depend on us to protect them.

Rob- When do you talk to your students about a situation like this?

You’re working at home when your daughter runs in to get you. She says, “Dad, there is a guy in our garage. I think it might be the guy they talked about on the news.” The guy your daughter is talking about is wanted by the police. If your daughter saw the man then it is a good guess that he saw your daughter as well. You tell her to call 911 and to wait inside. You grab your gun and look through the window. You see the man in your garage and go towards him. You order him to the ground. The fugitive complies. The criminal and his girlfriend have been robbing small stores and stealing cars in Texas and Oklahoma.

Elizabeth- Let’s give credit to both the dad and the daughter. She retreated. She got help from her dad. She called 911. Good for her.

Dad had a gun. He ordered the intruder to the ground, and didn’t shoot when there was not an immediate, serious, and unavoidable threat. Dad complied with the police when they got there, and the bad guy went to jail.

Elizabeth- I watched the video, and the daughter was old enough to go armed at home. I want dad armed as well with a gun on his hip. What would have happened if the intruder was armed and the bad guy followed the young woman inside?  Dad was lucky that he had time to get his gun. Now you have to protect your family with your bare hands, and that is a bad plan.

I tell my students to lock the door, get your gun, retreat to a safe room with your family, and call the police.

Rob- When do you talk about that with your students?

Elizabeth- This family didn’t have a plan. The daughter said she didn’t know what to do in the television interview. One of the best ways to protect your family is to talk with them about what to do if you have an intruder.

It is 3am and you’re behind the counter at your 7-11 convenience store. A man runs in with a gun in his hand. He points the gun at you and then jumps over the counter. You let him take the money from the cash register. Some of your employees and customers sneak into the back room. After the robber stuffs his pockets, he follows your employees toward the back.

You’re armed. You draw your handgun and shoot the attacker. He shoots back. You’re hit. The robber runs out the back and you lock the door behind him.

Your employees and customers are shaken but not hurt. Now you call the police and EMTs. The police find the wounded robber across the street. Both of you are taken to the hospital.

Your attacker is charged with attempted robbery with a dangerous weapon, assault with a deadly weapon with intent to kill, inflicting serious injury and possession of a firearm by a felon.

Elizabeth- Wow. The store owner was willing to give up the money, but not the safety of his employees and customers.  Good for him. He had a gun. He waited until he had to use it. He stayed at the scene and made it safe by locking the back door. Then, he called police.

Rob- The store owner was shot but he continued to protect innocent people.

Elizabeth- That is what good guys do.

Rob- You have small business owners as clients. What do you want them to do in a situation like this?

Elizabeth- My students often ask me when to shoot and when to stop shooting. Shoot when you face an immediate, lethal, and unavoidable threat to you or other innocent people. Shoot until the threat stops.

Rob- What else would you like us to do?

Elizabeth- These convenience stores are robbed frequently. See if more than one of your employees can carry a gun. Talk with them, have a plan of action, and train with them.

There is a frightening thing that happens in a robbery like this. Everyone drops to the floor when the shooting starts. That means there are a lot of bodies lying on the floor when robber runs away, but you don’t know if they are hurt or injured. Go to your employees and customers and tell them it is safe to get up. Make sure they are OK and ask them to call 911.

I assume the store had video surveillance.  Have a medical trauma kit at the store and train your employees how to use it. Notice that both of these individuals were shot and both survived.

Exit-  Rob- that wraps up this episode. Elizabeth, thank you for helping us again. Where can we learn more about you?

Elizabeth- I instruct in Colorado Springs at my private range in Black Forest. Contact me at Colorado Boots Firearms Instruction.

Rob- After you look at Elizabeth’s classes, then leave us a message on the podcast facebook page and the self defense gun stories webpage.

Elizabeth- We share this podcast with you for free.  Please share the podcast with a friend and give us a rating on I-Tunes and Stitcher. We’re also available on Google Play Music,Tunein, Spotify, and iHeart Radio.