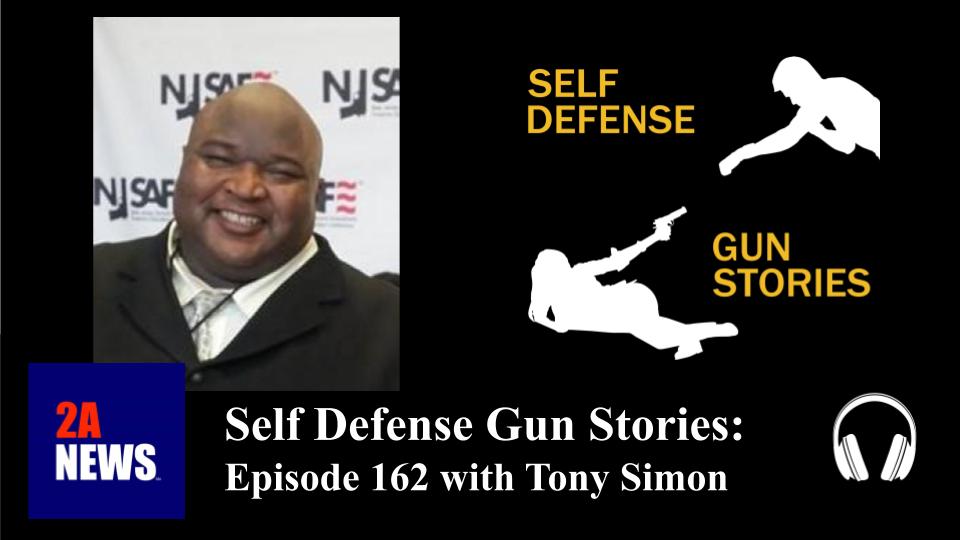 I’m glad you found us and welcome to episode 162 of Self-Defense Gun Stories. This podcast is for people who are curious about self-defense, and for those who are already trained. I’m your host, Rob Morse. We’re joined this week by self-defense instructor Tony Simon.

Tony- Hi, Rob. I’ve been working and shooting and exercising. I had to take some time off work due to illness.

Rob- We received 5 more ratings on iTunes this week (88/52). Thank you, Christmas with Mrs Claus for leaving a review. Please go to the iTunes store where you subscribe to podcasts and give us a rating and leave a comment.

Tony- We’ll talk about recent examples where gun owners were in a life threatening situation. Were they lucky, or did they have a plan? What should we do if we were in their place? We give you the links back to the original news article in our show notes.  Our first story took place last week in Las Vegas, Nevada.

You’re in your apartment during the middle of the day. You hear a crashing sound. Then hear people walking around in the apartment upstairs from you. You know the occupants of that apartment and they are usually at work at this time. You call police. A few minutes later, three men kick in the door of your apartment. You’re armed. You shoot one of the attackers and all three of them run away. Police arrest one of the robbers at the local hospital. Several of the neighbors complained of similar breakins.

Tony- Criminals robb apartments when people are at work. These robbers didn’t care if someone was at home. They thought that three of them would overpower the occupant. A firearm let the homeowner successfully defend himself against three attackers that kicked in his door.

Rob- What did our defender do correctly.

Tony- His door was locked. That bought him time to react, time to get his firearm. He had a gun and the gun was ready to be used. He called police. He even called the police before the robbers kicked down his door. He stayed in his apartment and didn’t go to the neighbors apartment to stop the thieves and didn’t chase the robbers or shoot at them when they ran away.

Tony- I want you standing at the back of the hallway or off your bedroom so you’re not exposed if someone kicks down your door, distance is your ally. Peek over your bed or around a corner, but I don’t want your attackers to see a target they can shoot at. This isn’t a western, you don’t want a “fair fight” with criminals. You can defend yourself  while you’re hidden in a dark hallway and your attackers never see you before you fire.

Rob- What else did you notice?

Tony- The fact that multiple neighbors have gotten robbed is a clue, It is time to move.

Rob- When do you teach your students to retreat and shoot from hidden cover?

Tony- We host a class dedicated to home defense with a firearm, “home defender ” where we run various scenarios using SIRT Laser Training guns that include firing from cover, defending against multiple attackers, moving safely through your home with a firearm and more.

Tony- That is enough for now. Our second story happened last week in Spring, Texas.

Rob- Second Story-  Are you armed as you drive home?

It is dark outside when you park your truck in front of your family’s home. You get out of your truck and see two men approaching you from behind. They have their faces covered, and one of them is armed. They demand your wallet, phone, and keys. You’re being robbed.

You have your concealed carry permit. You’re armed. You step back and draw your firearm. Your attacker shoots you in the leg. You shoot him in the chest and both robbers run. You shout for your family to come help you. They take you to the hospital. That is where you tell police you were attacked.

Police find your robber a few blocks from your home. They take him to the hospital where he was pronounced dead. The police are looking for his accomplice.

Tony- Robbers don’t “appear out of nowhere ” The good guy had his firearm on him and was paying attention when the robbers approached. That gave him time to process what was going on and to implement his defensive plan.

Tony- The good guy was wounded and stayed in the fight, then he got his family to take him to the hospital. He defended himself and got the help he needed.

Rob- Even after he was wounded our good guy didn’t give up.

Tony-  It’s important to know that being hurt doesn’t mean you are out of the fight. Keep fighting, win the fight and then get your injury treated.

Rob-  What else can we learn here?

Tony-  It’s very important to call the police and report your defensive gun use as soon as possible. Even if you are wounded you still want to be the first to report the shooting. Doctors have to report patients showing up in the emergency room with gunshot wounds.

Rob- Third story- Are you armed when you’re in public?

You’re standing in the checkout line of a gas station convenience store. Two young men rush in waving a gun around. You’re closest to them, so they tell you to hand over your wallet and phone. You do. Then the armed robber points the gun at the clerk and demand the money in the cash register.

You have your concealed carry permit. You’re armed. You slowly step back and present your pistol. You shoot both robbers. They run from the store. You call police. The police take your gun and the gun the robbers dropped. The police find your attackers at the hospital where one of them died. The second attackers is charged with several counts of armed robbery.

Tony- Our defender got a lot of this right. He had his permit. He carried in public. He faced a lethal, immediate and unavoidable threat so he was justified to use lethal force to defend himself or others. Our defender waited his turn. He stopped the threat. He stayed at the scene, and he gave a statement to police.

Rob- Is there anything you’d like us to remember?

Tony- Practice so you know how much time you need to present your firearm and how much time you need to shoot accurately. That way you’ll recognize when you have an opportunity to save your life. Your chances of survival go up if you move as you shoot. The robbers have a mental map of where you were when they turned away. They turn back and you’re not there. They have to find you before they can shoot at you. That means you can defend yourself without being shot.

Rob- How hard is that to learn?

Rob- That is a lot to learn.

Tony- Yes, but it is a habit that you can reach back and use anytime you need it.

Many victims v one robber

It is about ten at night and the customers are starting to thin out at your small restaurant. A young man walks in and tells everyone not to move and to put your hands up. Your four employees slowly raise their hands. You’re at the back of the stack, so you raise one hand. Your robber has a gun pointed at your employees and at your partner. Your partner is armed. You reach the top of his pants and grab his gun. You slowly turn the gun toward your attacker. You shoot your attacker several times. Your attacker runs away. Your partner calls police.

Your attacker ran to a waiting car. His accomplices dumped his dead body on the street.

Tony- These defenders had a plan. The good guy hid behind other employees. That gave him time to see what was going on, to pick his target, to present his firearm and to shoot accurately without getting shot himself.

Rob- There is more.

Tony- Oh yeah there is more. Our defender didn’t shoot anyone who didn’t need to be shot. He stayed at the scene and gave a report to the police.

Tony- Ask everyone in the restaurant to call 911. That means the police have an instant record of the phone number of the witnesses. Ask if each person in the store if they are alright or if they need any help. That establishes you as the good guy who saved them. Have your phone on record when you ask.

Rob- Restaurants and convenience stores get robbed a lot.

Tony- They do. That means you should figure out a plan and practice it if you own a small store. Walk through the plan with your employees. Ask an instructor to help you with it.

Exit-  Rob- that wraps up this episode. Tony, thank you for helping us again. Where can we learn more about you?

Tony- Find me at Diversityshoot.com You can find me on Instagram and facebook at Simon Says Train and The 2nd is For Everyone podcast. You can donate to the “2A4E podcast” on Patreon.com at the $20 level- one of those patrons will receive a CZ P10 9mm handgun in September

Rob- After you donate to Tony, then leave us a message on the podcast facebook page or the self-defense gun stories web page.