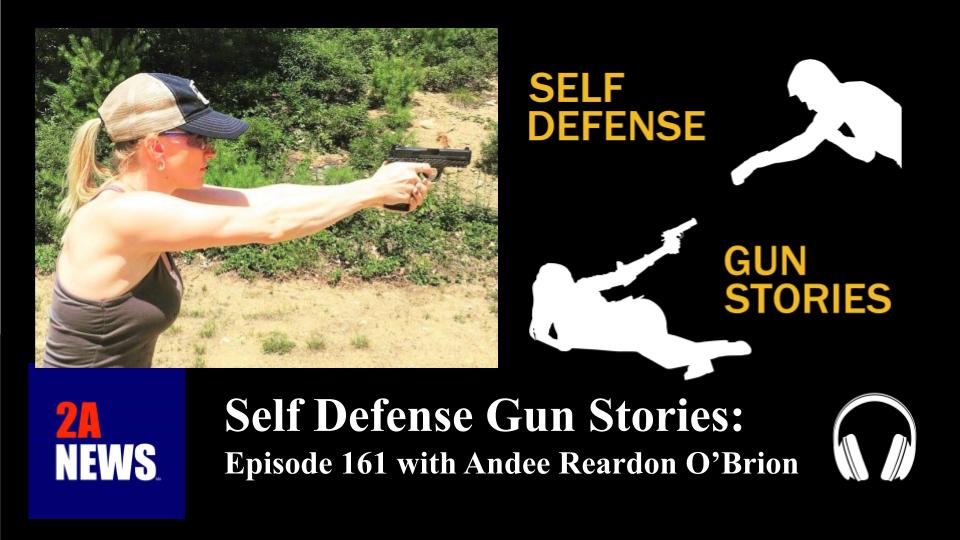 Welcome to episode 161 of Self-Defense Gun Stories. This podcast is for people who are curious about self-defense, and for those of you who are already trained. I’m your host, Rob Morse. We’re joined this week by self-defense instructor Andee Reardon O’Brion.

Rob- We received three more ratings and one more review on iTunes in the last few weeks.

Andee- Please go to the iTunes store where you subscribe to podcasts and give us a rating and leave a comment. Your comments tell new listeners that the show is worth their time.

In this episode, we’ll talk about recent examples where gun owners were in a life threatening situation. Were they lucky, or were they armed with good habits? What should we do if we were in their place? We give you the links back to the original news article in our show notes.  Our first story took place last week in Nashville, Tennessee.

Rob- First story-  Are you armed as you drive at night?

It is after work and you have some money to deposit at your bank. You walk up to the ATM when you see someone crossing the parking lot towards you. The stranger is wearing a hoodie. The hoodie is pulled up over his head and his face. The stranger has a gun in his hand. You’re being robbed.

You have your concealed carry permit. You’re armed tonight. Your attacker tells you to give up your money. You say fine, and then reach for your pocket. You shoot your attacker several times as you move away. Your attacker runs and drops his handgun. You pick up the attacker’s gun and then drive to your girlfriend’s house nearby. You call the police. You come back to the ATM and make a statement.

The police find your attacker around the corner and take him to the hospital with serious injuries. Your 19 year old attacker is charged with attempted aggravated robbery.

Andee- ATMs are dangerous, but some people have to use them for night time transactions. Yikes. Stay situationally aware and try to find one in a well lit area.

Rob- Does this happen very often?

Andee- Criminals know you have cash. It’s been estimated, There’s one ATM crime (including robbery) per 3.5 million transactions. With an average of 15% of victims being injured.

Andee- He had his carry permit. He was armed, aware, patient, decisive. Didn’t get shot. Grabbed the evidence. Moved to safety, called the police, and returned to the scene. You can’t shoot someone for robbing you but when someone has a gun pointed at you, they are an immediate threat. He was within his rights to protect himself with a firearm.

Rob- What would you like your students to do if they have to deposit money after work.

Andee-  You can’t deposit cash at a store, but some stores have branch banks inside. They are safer than ATMs in the dark. Studies show dive-up ATMs are safer than walk-up ATMs. You should drive your vehicle as close to the ATM as possible so a person cannot fit between you and the wall. Make sure your doors are locked before you pull in.

Bring lots of armed friends? Move as you shoot. Know the time you need to get shots on target. That means you know when you have a chance to save your life without getting shot. I want to stay at the scene if I can do it safely.

Andee- If you have cash from the store, plan to deposit it during daylight and do not travel alone. Do that even if you have to leave a few dollars in the store.

Rob- Second Story-  Are you armed in public?

You’re a realtor. It is Sunday morning and you’re getting ready to show this house.

You’re alone when a man walks inside. He’s in his late 20s to early 30s. He asks the right questions about a loan and then asks to see the upstairs. That is where he pulls out a knife and a can of bear spray. He tells you to give him your ring and to get into the closet.

You have your concealed carry permit. You’re armed. You draw your gun and your attacker sprays you with the bear spray. You fire your gun and he runs away. It is hard to do, but you call police. They take you to the hospital to wash you off.

Andee- This is scary but happens frequently to realtors. Real estate agents advertise where they will be and when, so it’s easy for someone with bad intentions to make a plan to gain access to them.  This lady was hunted. She admits she had a hard time believing it was happening and stated the value of her training, which she credits for her survival. She was armed and determined to protect herself. She fought for her gun and then did not chase the bad guy. She stayed at the scene and called police.

Rob- What would you tell your realtors to do.

Andee- Carry on your body. Practice drawing your weapon.  Put a chime on the door so you know when you have company. Bring a friend to the open house so you don’t have to be alone with strangers. Trust your gut, don’t trust a stranger to walk behind you, let them walk ahead and keep that reactionary gap open. If something doesn’t feel right, get out.

Rob- Third story- Are you armed as you drive?

It is two in the morning. You fill up your car’s gas tank and you’re getting yourself some coffee. There are several other people in the convenience store. There are also two clerks behind the counter. You look up as two men rush in. They shout that no one should move. They have hoodies pulled over their heads and bandanas over their faces. They also have guns in their hands. One man stays at the door. The other man runs behind the counter. The store clerks put their hands up and so do the two customers in front of you.

You have your concealed carry permit. You’re armed. You’re standing at the back of the store and you wait while the robber behind the counter waves his gun around. A moment later, both robbers are watching the till as the robber stuffs money into his pockets. The robber near the door has his gun up. You draw and shoot that robber twice. You get one shot at the robber behind the counter before he falls to the ground. You look back at the first robber and he laying on his back outside the doorway. Other customers grab the robber’s guns. Everyone calls the police.

Police take the wounded robber behind the counter to the hospital. He and his two accomplices have a string of robberies going back months. This was the fifth convenience store they’d robbed today. Your attackers were eighteen and nineteen years old.

Andee-  It’s often those quick trips to get gas or a coffee where we might have the urge to say “I don’t need my gun” and want to leave it home.  That might be the one time you really need it. Carry everyday if possible.

Rob- How did our defender stop the attack and not get shot?

Andee-  In a situation like this, taking cover and waiting for the right moment to act might have a better outcome than rushing in and shooting.

Rob- Fourth story- Are you armed as you walk down the street?

You’re walking down the street after dark. You notice four men ahead of you, and you slow down. Three of the men notice you. Two of them point guns at you and order you to come closer. These three robbers were attacking a stranger, and now they’ve turned their attention to you.

You have your concealed carry permit. You’re armed. You study your attackers as you walk closer. You both want to slow down and you want to run faster. You draw your firearm and shoot your three attackers. They run away. You call the police.

The police find your attackers in an abandoned house nearby. They also find stolen property and the robbers guns.

Andee- The robbers tried to run away, and they crashed their stolen car. These were bad guys.

Rob- Is this unusual?

Andee- He was carrying. He was prepared to use his pistol.

Rob- What should we do in this situation?

Andee-  I hope I’m never in the position of walking in Detroit after dark… But if I was, I would be on high alert and watching everything around me. If I saw a robbery in process, I would get to a safe area and be a good witness. If the robber started to approach me and they pointed guns at me, I would quickly look for cover. It’s a lot harder to shoot someone behind a dumpster or wall.

Rob- How would we learn to do that?

Andee-  Advanced firearm classes can teach you how to shoot on the move and to shoot while using cover.

Rob- After you look at Andee’s classes, then leave us a message on the podcast facebook page or on our website.