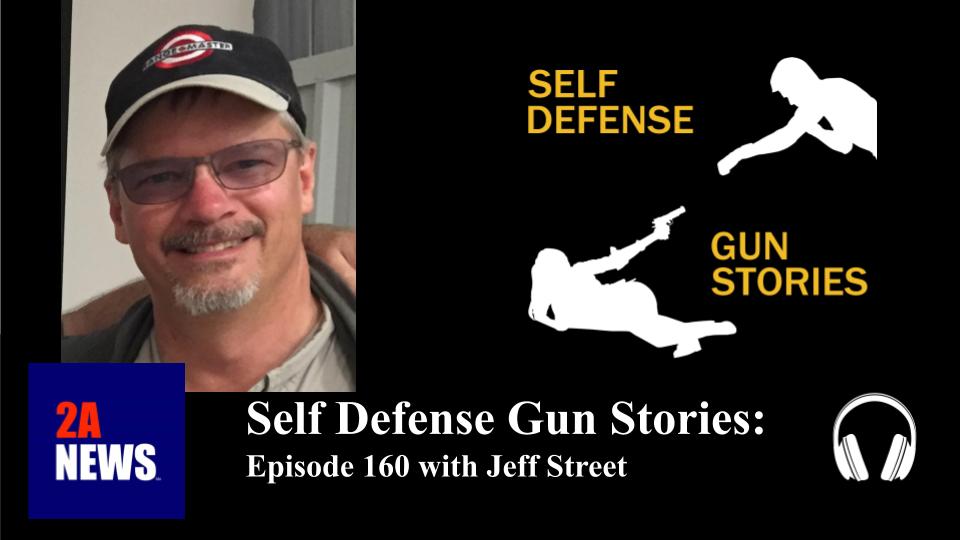 I’m glad you found us and welcome to episode 160 of Self-Defense Gun Stories. This podcast is for people who are curious about self-defense, and for those who are already trained. I’m your host, Rob Morse. We’re joined this week by self-defense instructor Jeff Street.

Jeff- Hi, Rob.  I’ve been working and shooting. Here is a link for suicide prevention.https://www.nssf.org/safety/suicide-prevention/

Rob- We received two more ratings and reviews on iTunes this week. Please go to the iTunes store where you subscribe to podcasts and give us a rating and leave a comment. Listener Matthew wrote in. He doesn’t want to use Facebook, and asked for other ways to contact us. That is a good idea. You can leave a message at the end of every episode at Self-Defense Gun Stories.com. Also, you can write me at Rob at Politics and Guns.com

I’m still looking for a producer and audio editor of the spanish language version of Self-Defense Gun Stories. If you know someone, then please ask them to contact us.  Until then, Jeff, please introduce our podcast to our new listeners.

Jeff- We’ll talk about recent examples where gun owners were in a life threatening situation. Were they lucky, or did they have a plan? What should we do if we were in their place? We give you the links back to the original news article in our show notes.  Our first story took place last week in Houston, Texas.

You work as a delivery driver after your regular job. You pick up the food order and drive to the address. There are people around the housing complex, but no one comes out to pick up their meal. A teenager walks by a minute later. He pulls a gun out of his pants and tells you to give him your wallet. You hand it over. He tells you to give him the food as well. You hand that to him as well. You’re armed. As the robber is juggling his packages, you draw your concealed firearm and shoot your attacker. The robber runs away. You stay at the scene and call the police. They find your robber a few blocks away. The officers put a tourniquet on your attacker and EMTs rush him to the hospital.

Jeff- I was a pizza delivery driver in Texas. (1981) I didn’t own a gun then. I had never heard of “situational awareness”.

Our defender needed his self defense tools with him and I’m glad he was armed. It doesn’t say if the defender was in his car or outside his car. That makes a big difference because it is hard to draw your firearm while you have your seatbelt on inside your car.

Our good guy didn’t chase his attacker. Our good guy stayed at the scene and called police.

Rob- These delivery services were supposed to be convenient for the customer and safe for the driver. Not so much.

Jeff- We’re getting more stories like this where the delivery driver is the target of a robbery. Delivery services like Waiter were supposed to be safe since the person placing the order submits a credit card and the driver doesn’t handle cash, but these drivers remain a target for criminals.

Rob- What would you like us to do if we’re trying to make a little extra money by delivering food at night?

Jeff- Don’t meet in a parking lot.  Park someplace that is well lighted. Get out of your car. Put your car between you and your customer. Go armed. Have your firearm on your body in a good quality holster. Get training on how to draw.

Jeff- Presenting efficiently is hard. It takes a second to do and yet takes pages to describe. What matters is the quality of your instructor.

Rob- How do we find a good instructor to teach us to present a firearm from a concealed holster?

Jeff- Check the Armed Citizens  legal defence network affiliate instructor page and check to see that they are RangeMaster Certified.

A young woman you know asks if you’d like to come over. You enter her apartment, but then three men walk out of the back room and one of them points his gun at you. You’re being robbed. You’re armed. You wait your turn, and then you draw your gun and shoot your attacker. You run from the apartment and call police.

Jeff- Reminds me of Samson and Delila. How did these people think they were going to get away with this crime?

We trust people we think we know, and sometimes we’re wrong. I’m glad our victim was armed. He waited his turn rather than drawing a firearm as soon as he saw that he was being robbed. He defended himself as he ran. Running makes you a harder target and it also gets you out of trouble. Our defender called the police and stayed near the scene of the attack.

Rob- What are the steps you go through with learning to draw on the move?

Jeff- Basic safety. Basic shooting fundamentals. Presentation from the holster, then we go to shooting on the move.

Rob- Is that one class a week for a month?

Jeff- About 40 minutes on our outdoor range. That gives you first exposure, but it takes practice for it to become familiar.

Rob- What other suggestions do you have?

Jeff- Meet strangers in a public place. Many apartment complexes have a common room. Don’t expect gifts from strangers.

Rob- Things that sound too good to be true usually are.

Rob- Third story- Are you armed when you’re camping?

Jeff- Attacker was bold. I don’t plan on camping anytime ever. If I did I would set up an alarm system with cow bells and string.

Recognized that there could be a problem. Admitted that the problem was in his tent right now. Had his self defense tools. It sounds like he didn’t keep shooting his attacker once the attack stopped. Both victims stayed at the scene and contacted the police.

Rob- Being attacked as you camp is crazy.

Jeff- 8 out of 10 armed assaults are committed by people who are intoxicated. This sounds like one of those.

Rob- So a druggie wants to rape your girlfriend and won’t take no for an answer when you’re both fighting him.

Jeff- Neither druggies nor criminals think like we do. Don’t waste time trying to reason with unreasonable people. Stop the behavior and then let the police do the counseling.

Rob- Fourth story- Are you armed when you answer a burglar alarm?

You’re the pastor of the Seminole Heights Baptist Church. Your phone rings with a notice from the church security alarm. You and one of your deacons will go take a look. You grab your firearm and drive to the church. You open the doors and find someone inside. You draw your gun and order him to the ground. You call the police.

The cost of fixing the broken window and other damage the thief did is money your church can’t use to help the needy in your community.

Jeff- My Brother is a pastor of a small church.  He wears many hats. Chief of security is one of them.  If the Pastor had surveillance cameras he could look and see if any windows were broken. Simplisafe would tell you where to look.  Which window was broken. Also hurricane level security windows are a great idea.

I’m glad he had a gun for self-defense. He did not shoot the intruder when the intruder complied. He had backup on the way, and he called the police.

Rob- Was the pastor wrong to go to the church?

Jeff- There are too many false alarms to call the police every time the alarm trips.

Rob- What do you want us to do in a situation like this?

Jeff- Get low-light video cameras and some motion detectors. They can link to an office PC at the church and then send you a text. Together, they probably cost less than a broken glass door. Look at the video to see if someone broke into your church. Call the police if you see an intruder is still there. If he’s already gone then go find out what happened and board up the broken window.

Exit-  Rob- that wraps up this episode. Jeff, thank you for helping us again. Where can we learn more about you?

Jeff- Find me at Step by Step Gun Training in Naples Florida.  We provide group classes as well as custom training and weekend competition. Leave us a message on the Step by Step Facebook page.

Rob- After you look at Jeff’s classes then leave us a message on the podcast facebook page, or on the Self-Defense Gun Stories web page.

Jeff- We share this podcast with you for free.  Please share the podcast with a friend and give us a rating on I-Tunes and Stitcher. We’re also available on Google Play Music, Tunein, Spotify, and iHeart Radio.