Published on October 27, 2019  |  By Jeremy Hatfield
In Uncategorized 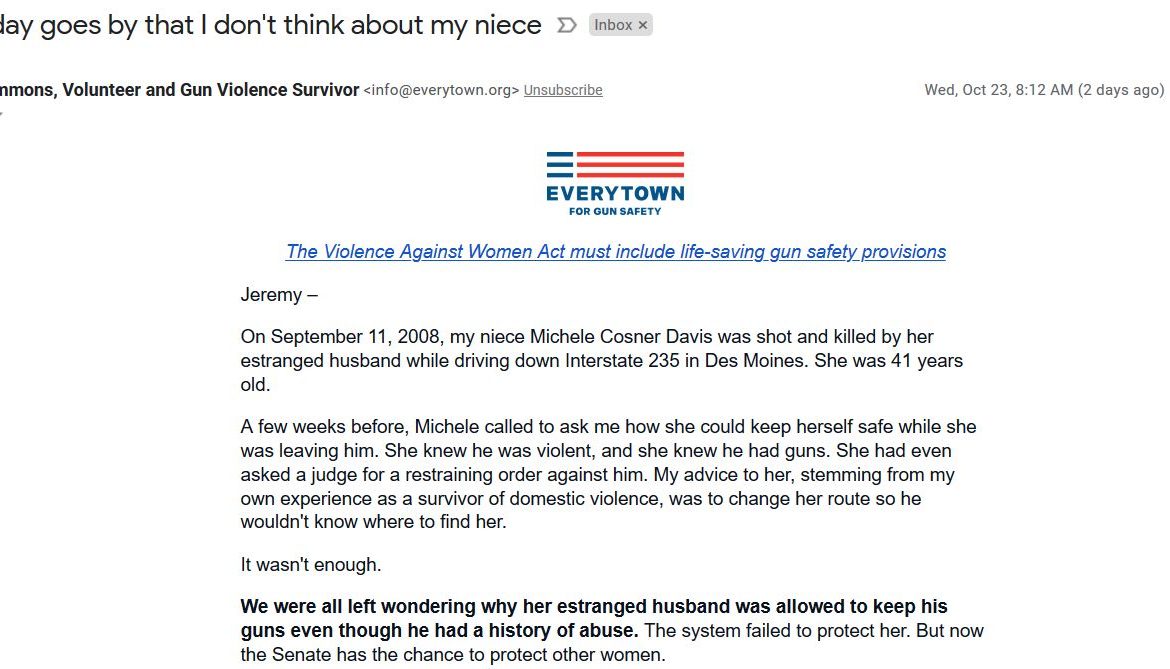 I subscribe to Everytown’s email list; not because I agree with them, but because in the war over ideas and perspectives, it’s useful to know how the opposition thinks, especially if your rights are at stake.  Weaknesses in their arguments are easier to find that way, too.

For example, in this email, Everytown attempts to tug at your heart strings with the headline, “Not a day goes by that I don’t think about my niece,” and then details how the victim in question died at the hands of a violent ex-boyfriend.

But before her death, she broke off the relationship, and even got a restraining order slapped on the guy.  She asked her aunt, “What else can I do to protect myself?”

Her aunt’s answer:  change your daily travel route.  Which is reasonable; after all, the first line of self-defense involves location.  Don’t be where evil tends to be.  But it shouldn’t be your only line of defense.

And even by her aunt’s own admission, it wasn’t enough.

There’s a silly game you might have come across on social media, where someone posts, “You’re facing a horde of zombies.  What you have immediately to your left is what you have to fend them off.  What is it?”

It’s intended to be ridiculous (“An old copy of Roget’s Thesaurus!”), but it should get you thinking about how prepared you are when evil does decide to pay a visit.  That lady’s niece was only looking to be left alone, but evil often has its own intentions, and it tends to understand only one language:  force.

Sadly, the aunt offered nothing in case her plan failed.  Neither does Everytown in the rest of the email, apart from asking you to give them money so they can try to convince a politician to leave everyone more vulnerable to evil men like that woman’s ex.

And that’s the sort of mental rails gun control runs on.  Money spent like that might buy some virtue signalling points, and perhaps help keep someone in office who has been there too long as it is, but will do nothing for those who come face-to-face with evil.

Going back to the zombie game, my answer would be the battle belt hanging on the wall in my “home office,” complete with .45, reloads, IFAK/Trauma Kit, and spare magazines for the M1A over the door.  When away, I usually have another .45 with reloads, knife, leatherman, phone, wallet, with extra tools and gear in an EDC bag.

Sound like much?  Well, decide for yourself.  Two weeks ago, we had our first snowfall.  While Alaskans are used to the snow, even we make the cheechako mistake of thinking we don’t have to change our summer driving habits when the first snow covers our roads.

Such was the case with the driver of the car I was while on the way to work.  He was going a little too fast for the road conditions, hit a rut the wrong way, and next thing you know, we were fishtailing, drifted into the opposite lane, and then started swinging around backwards while heading to the ditch on our original side of the road.

I didn’t panic.  I thought, “here we go” and started taking inventory of what I had, and how I might need it to get out of a situation.  Phone? Check.  Trauma kit?  Check.  Window breaker and belt cutter?  Check.  And then just waited to see what happened next.

Happily, we stayed on the road, on our shoulder, just pointed the wrong way.  Nothing had to come out of the bag that day.  But I was glad it was nearby in case.

Or, the time, about two years ago, when we had a yahoo with a rifle taking shots at a group of rental buildings down the highway from us.  We heard about it from the local dispatcher, along with word that the shooter might be headed in our general direction on foot.  My boss knew I carried, and asked, “You got your gun on you?”  I nodded.  Had the bag with trauma essentials, too.  Fortunately, nothing happened.

Both days, none of us were expecting any trouble.  But that’s just it; things like this can happen anytime.  The most important question is, how ready are you?

The second most important question is, who encourages you to be ready?  It certainly is not Everytown.