Published on June 6, 2019  |  By Jeremy Hatfield
In Uncategorized 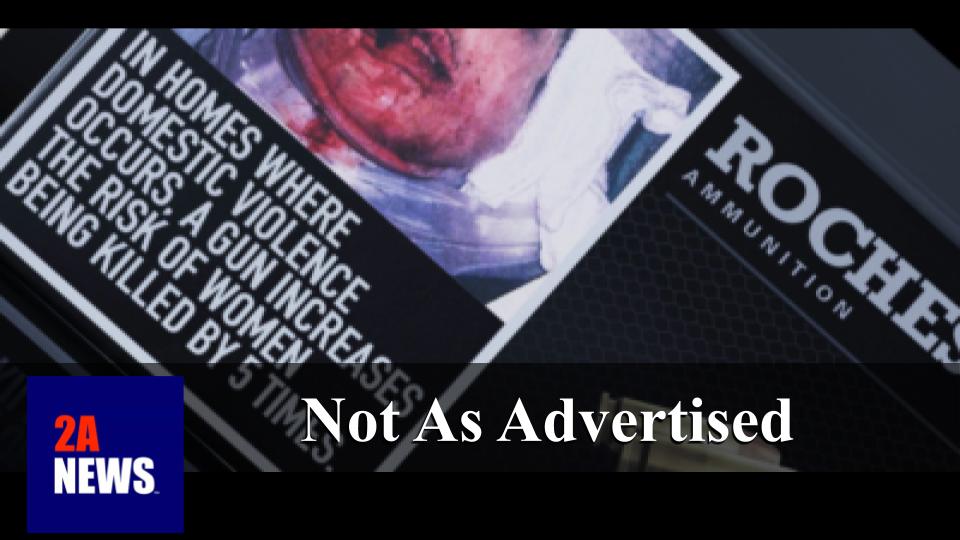 A complete view of American gun culture is not in gun control’s best interests. It better serves their goals to keep people from seeing the forest for the trees. To this end, gun control arguments tend to center around three major characteristics: omission, emotion, and statistical sleight of hand.

The pair’s plan involves something they had supposedly already done for cigarettes. We Americans are already familiar with the Surgeon General’s warning on cigarette packs, but these two advertising gurus took it a step further with their clients, but not being content with mere verbage, they added visual impact with a gross picture illustrating smoking’s effects.

As an aside, you have to wonder, since advertising’s goal is to promote sales of something, how did these two find success doing just the opposite?

Whatever the case, they thought it would be a good idea to apply their aversive advertising to ammunition. If this sounds vaguely familiar, students of gun control history will recall the CDC’s Mark Rosenberg suggesting the same strategy in the 1990s, aiming to “revolutionize the way we look at guns, like what we did with cigarettes…It used to be that smoking was a glamour symbol—cool, sexy, macho. Now it is dirty, deadly—and banned.”

And, like with the CDC, as well as the rest of the gun control movement, the presentation is one-sided. And here we come across strategy #1: Omission.

The overwhelming majority of gun owners (99.7% by my reckoning) do nothing wrong with their guns–they don’t murder, they don’t rob, they don’t threaten, neither do they kill themselves nor injure others, intentionally nor accidentally. This is normal behavior in American gun culture. But it does no favors to gun control propaganda, so they shove this normalcy off to the side and hyperfocus on and overplay the abnormal 0.3%, to the point that a lot of people mistakenly believe that “gun violence” is a lot more prevalent than it really is.

Also, defensive gun use is a lot more common than gun-related misdeeds. This was underscored by a federally-funded research paper during the Obama administration. It was because it dared to include these inconvenient facts supporting guns’ value as defensive tools that gun control activists choose to pretend the report never existed.

The main feature of the gurus’ warning label is a gross picture, and thus we come across strategy #2: Emotion.

Before the patron saint of gun control, Michael Bloomberg, organized Everytown, he put together Mayors Against Illegal Guns, which hired a PR firm to create a messaging guide for gun control activists. It explicitly discourages logical discourse and engaging facts, acknowledging that gun rights activism dominates that field. Instead, they encourage a shallower, emotional approach, even using imagery to short-circuit rational discussion.

The third element is a brief “factoid” pertaining to “gun violence,” which illustrates what gun control propaganda does with what little facts it chooses to deploy: it uses statistical sleight-of-hand.

Now, the example given mentions “In homes where domestic violence occurs, a gun increases the risk of women being killed by 5 times.” Five times more than what? They don’t say.

This is a common gun control propaganda tactic–hiding behind rates and percentages without giving any frame of reference to make them meaningful.

Here’s another example: I got into a heated debate about gun-related murder, when my opponent mentioned how 70% of murder is committed with guns. When I asked him what that 70% meant, he got flustered (sadly, many simply regurgitate stats they don’t understand themselves). He got displeased even further when I pointed out the total number of deaths his 70% represented was fewer than the lower murder rate of 58% from a couple of decades prior, yet he thought that guns were a much bigger problem now than they were then simply because the percentage rate was bigger.

Still another example:  When a gun control proponent discovers I live in Alaska, they are quick to point out how my state tops the charts in gun-related death rates, at least according to the CDC. Then, I am obligated to point out that these high rates still yield fewer deaths than the state with the lowest rates, Massachusetts.  It is for this same reason that whenever a gun-related tragedy occurs that catches national attention, it never seems to involve Alaska, despite its seemingly high “gun violence” rates.

So, rates don’t tell the whole story, which is why it is a favored tool of a movement that gets no benefit from telling the whole story.  This would suggest that gun control is dependent upon misinformation (nice way of saying lies) to get support for its cause.

And for as long as it relies upon misleading the public, the “honest dialogue” it so earnestly calls for will never be possible.