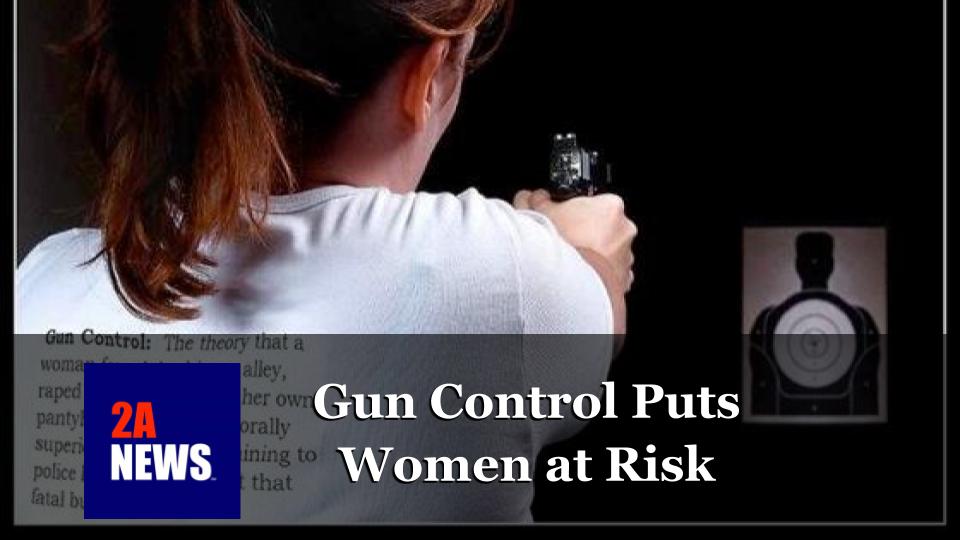 Politicians said that gun-control would make us safer. That sounds good, but it isn’t what we see. One reasons is gun-control disarms innocent women. Taking the tools of self-defense away from women leaves them at a physical disadvantage. That is only one of the ways that gun-control leaves women at greater risk. Why did the politicians and the news media ignore these issues while they were shouting for more gun-control?

Sexual disparity- Men and women are different. Unarmed men have a physical advantage over unarmed women. Men are about 2/3rds stronger than women in their upper body. Men also have an advantage in lower-body strength and speed, but to a lesser extent. Size is also a factor since a large male can strike a female while remaining out of reach. Men also have a higher bone density so they can withstand harder blows. These differences put women at a disadvantage in a hand-to-hand fight where men are stronger about 90 percent of the time.

In contrast, a firearm works best at a distance. A gun helps equalize a woman’s ability to defend herself..if the state allows her to have one.

Limited magazine capacity- We were told that we’d be safer if guns had fewer cartridges in the magazine. Several states have enacted laws limiting magazine capacity to 10 cartridges or less. You might be surprise that this restriction has a sexual bias. When they are limited in the number of cartridges they can carry, men often choose a more powerful cartridge for their gun. Men also find it easier to conceal the larger gun that shoots the larger caliber cartridge. Women find that harder to do. Women prefer to shoot and carry a gun of a smaller caliber and lower power cartridge than a man. Choosing a smaller caliber usually reduces the felt recoil of the gun, the size of the gun, and the weight of the gun. The smaller cartridge can be shot faster..if there is ammunition to feed it.

We would never tell a female police officer to limit how much ammunition she carries in her gun, but that doesn’t stop the gun-prohibitionists from limiting a woman’s right to choose her own magazine.

State-limited roster of guns- We were told that we’d be safer if the consumer could only buy a smaller range of handguns. Yes, that regulation has a sexual bias. Limiting the choice of new firearms favors men since many older guns had a military and police heritage and were designed for men. Even today, men buy more guns than women, so relatively fewer guns are designed for smaller hands, for easier cocking, and for lower recoil. The good news is that today we have guns deliberately designed for shorter arms and smaller hands, where the state allows women to have them.

Gun free zones- More women graduate from college than men. Women are also at greater risk of sexual assault than men. Calling the school a “gun-free” zone disarms students, staff and people who merely walk across the campus. That puts women at risk. It isn’t fair that women have to choose between their physical safety or taking a night class at the local college. Unfortunately, the “gun free” zones don’t end there.

Some states don’t allow concealed carry even for young moms on their own property. They can’t go armed as they go to a bible study or bring a smelly diaper out to the trash late at night. They can’t carry in their car as they drop their kids off at daycare or at school. Disarming the victims always leaves them at greater risk.

Other firearms prohibitions- Some women are victims of domestic violence. They often need a place to stay when they flee their abuser. All the women’s shelters I’ve investigated are gun free zones.* Evidence shows us that women face the greatest danger immediately after they leave their abuser. They are not safe in this gun-free zone. Being disarmed also puts these women at greater risk as they take care of their family and leave the shelter.

So called “safe storage” laws dictate how a firearm and ammunition may be stored. Unfortunately, states and local governments do not provide free or low cost storage facilities for women in domestic abuse situations. Women are forced to choose between protecting their family and breaking the law.

Bureaucratic delays- For some women, the first time they considered the physical safety of their family is after domestic abuse or a physical attack. Unfortunately, bureaucratic delays for firearms permitting, registration and licensing keep these vulnerable women disarmed during that dangerous time. We have many stories of women who used their firearm to defend their family from their abuser. Unfortunately, we also have too many stories of women who asked for permission to get a gun and died waiting.

Protection orders- Truth is the first casualty in family court. If the government disarms both parties during a domestic dispute or custody battle, then we’ve put the woman at greater physical risk relative to the man. My friends who were victims of abuse noticed this flaw immediately. Once you look, it is easy to understand their concern. The proponents of gun-control didn’t talk about disarming women when they championed protection orders.

With about 300 thousand sexual assaults a year,
disarming women makes a difference.

Women know what they need to protect themselves and their families. Their choice may not be perfect, but it is better than a choice forced on them by a distant politician. Politicians support gun-control for their benefit, not for ours, and not for the benefit of the women we love. That is easy to see once we know where to look.

Sources- “Sex differences in strength — some observations on their variability” https://www.sciencedirect.com/science/article/pii/0003687083900832

*Please post in the comments section if you know of women’s shelters that provide safe storage for personal firearms. I’d love to interview them.