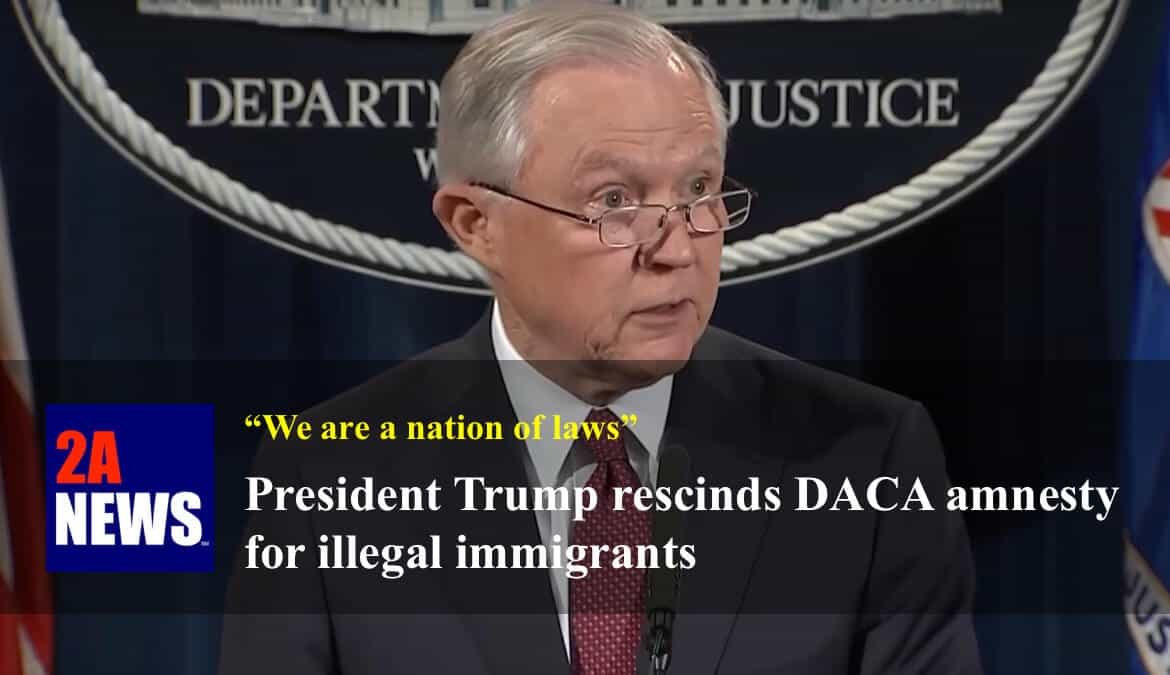 Attorney General Jeff Sessions announced on Tuesday the end of the DACA amnesty program for illegal immigrants. Sessions announced to a room of reporters assembled at the Justice Department, “I am here today to announce that the program known as DACA that was effectuated under the Obama administration is being rescinded.” A transcript of Session’s prepared remarks are now available on the Department of Justice website.

Deferred Action on Childhood Arrivals (DACA), was enacted by executive order by former president Obama. The order was viewed by many as blatant defiance of U.S. immigration law and an illegal abuse of presidential authority.

DACA effectively granted amnesty for illegal aliens who were under age 16 before 2007 when they arrived in the U.S. Typically accompanying illegal immigrant parents, the majority of DACA children have never applied for U.S. citizenship, but have enjoyed privileges available to citizens of the U.S.

In some cases, DACA children have even been granted preferential treatment over U.S. citizens, particularly in the area of college tuition discounts and enrollment caps. In June of 2017, the University of California’s Board of Regents announced it would grant illegal immigrants within the DACA system preferential consideration over U.S. citizens regarding tuition and enrollment at UOC campuses.

Under the DACA program, more than 800,000 individuals who illegally entered the U.S. as children have been shielded from deportation and given work authorization.

DACA: an “unconstitutional exercise of authority by the executive branch”

DACA was widely criticized upon its announcement and was viewed by many legal scholars as an illegal abuse of presidential authority. In his press conference on Tuesday, Sessions noted former president Obama’s abuse of his authority when creating DACA, “the executive branch, through DACA, deliberately sought to achieve what the legislative branch specifically refused to authorize on multiple occasions. Such an open-ended circumvention of immigration laws was an unconstitutional exercise of authority by the Executive Branch.”

“In ordering this blanket exception, President Obama was nullifying part of a law that he simply disagreed with… If a president can claim sweeping discretion to suspend key federal laws, the entire legislative process becomes little more than a pretense… The circumvention of the legislative process not only undermines the authority of this branch but destabilizes the tripartite system as a whole.”

Session described the results of the DACA order, noting it resulted in a humanitarian crisis at border stations, increased illegal immigration into the U.S., and took jobs away from citizens. Said Sessions, “This unilateral executive amnesty, among other things, contributed to a surge of minors at the southern border that yielded terrible humanitarian consequences and it denied jobs to hundreds of thousands of Americans by allowing those same illegal aliens to take those jobs.”

Session called for an “orderly and lawful wind-down” of the program. The program will be rescinded via a memorandum to be issued by Acting Secretary of Homeland Security Elaine Duke. While the memorandum will immediately rescind the program, current DACA beneficiaries will retain their protected status for a period of six months. No new applications for DACA status will be accepted after Tuesday. Those already under DACA who have already applied for their two-year renewals will have those requests processed.

Those whose status expires within the six month “wind down” period will be allowed to apply for two-year renewals until October 5, 2017. Illegal immigrants under the DACA program who leave the country at any time will forfeit their current DACA protection.

Sessions reportedly sent a letter to the Department of Homeland Security agency on Monday, informing them of the administration’s decision, noting that DACA “Was effectuated by the previous administration through executive action, without proper statutory authority and with no established end-date, after Congress’ repeated rejection of proposed legislation that would have accomplished a similar result. Such an open-ended circumvention of immigration laws was an unconstitutional exercise of authority by the Executive Branch.”

Session then reportedly warned against frivolous legal challenges to the decision to end the program, noting that the courts have already rejected challenges against the administration’s decision to end a similar program, the Deferred Action for Parents of Americans and Lawful Permanent Residents (DAPA). Sessions warned that the DACA program “has the same legal and constitutional defects that the courts recognized as to DAPA, it is likely that potentially imminent litigation would yield similar results with respect to DACA.”

Congress will now have six months to enact “appropriate legislative solutions” to address what to do with individuals impacted by the end of the DACA program.

President Trump issued a statement on Tuesday regarding his decision to end DACA, emphasizing “we are a nation of laws.” The president also noted one of the most often-criticized failings of former president Obama; his use of executive orders to circumvent the American legislative process. Said Trump, “In referencing the idea of creating new immigration rules unilaterally, President Obama admitted that “I can’t just do these things by myself” – and yet that is exactly what he did, making an end-run around Congress and violating the core tenets that sustain our Republic.”