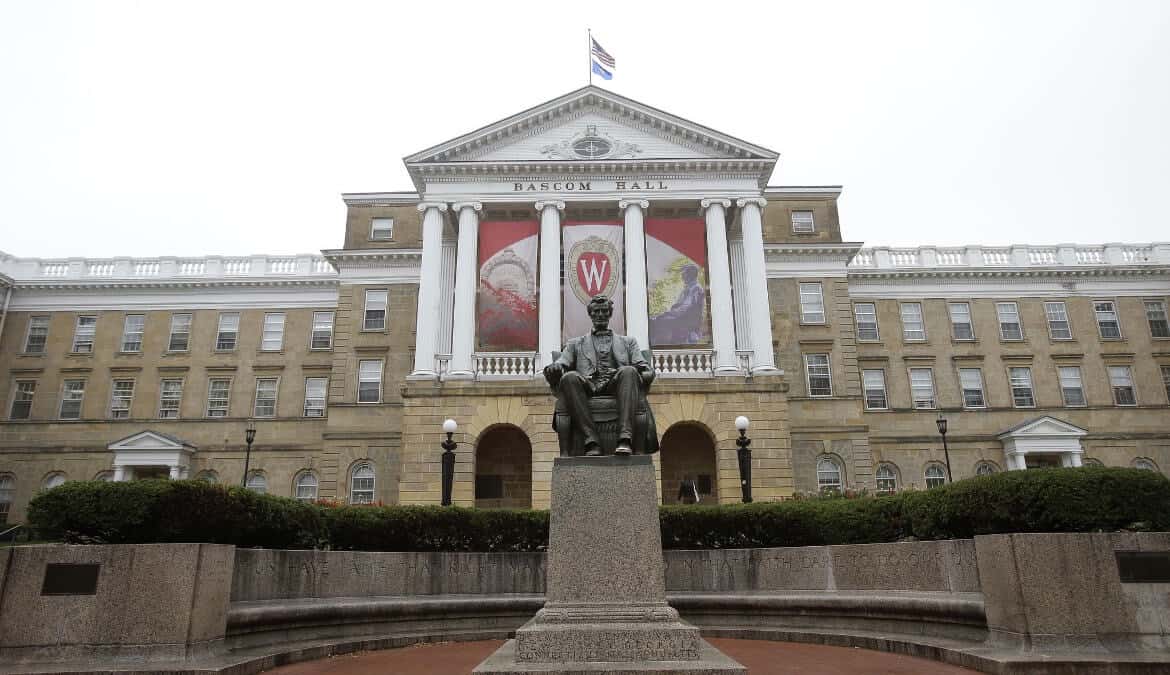 Bascom Hall on the campus of the University of Wisconsin in Madison, Wisconsin. (Image: Mike McGinnis / Getty Images)

University of Wisconsin to expel students who disrupt campus speeches

The University of Wisconsin Board of Regents approved a policy on Friday to expel students who disrupt campus speeches or otherwise infringe on another’s right to free speech.

The policy was approved at a Board of Regents meeting at the University of Wisconsin-Stout in Menomonie. Under the policy, students found to have twice engaged in activity that infringed on another’s free speech rights will be suspended. Students found to have infringed on another’s free speech rights three times will be expelled.

The policy closely follows pending legislation the state Assembly passed in June to guarantee students, faculty, and visitors are not shouted down by disruptive students at college events and presentations. Board of Regents President John Behling told the board before the vote that enacting the policy ahead of the Assembly’s legislation passage would demonstrate a “responsiveness to what’s going on in the [state] Capitol” and would help to “build relationships” with local lawmakers.

The only dissenting vote was cast by State public school Superintendent, Tony Evers, a Democrat. Evers accused the board members of sacrificing free speech to curry favor with lawmakers. State Rep. Chris Taylor, also a Democrat, agreed, chaffing at the board’s announcement. Said Taylor, “Who’s going to show up to a protest if they think they could be potentially expelled?”

Savion Castro, a senior at the university, echoed the concern, accusing the regents of catering to “right-wing extremists.” Said Castro, “The First Amendment is supposed to be messy and contentious and allow contentious debate… The whole point of protest is to disrupt the status quo and make people uncomfortable.”

Regent Regina Millner, however defended the policy, saying it’s designed to promote listening. “I don’t consider drowning out another speaker as freedom of speech,” Millner said. “That doesn’t qualify [as free speech].”

Millner is correct, and Castro would likely benefit from a refresher course in American civics. For that matter, so would Evers and Taylor.

The U.S. Supreme Court recently issued a rare unanimous ruling on the topic, effectively rebutting the left’s twisted misidentification of acts that silence another, for free speech. Justice Anthony Kennedy, in an opinion endorsed even by the three most liberal justices, sent a clear warning to those seeking to silence opinions they find offensive. “The danger of viewpoint discrimination,” Kennedy wrote, is that it “attemp[s] to remove certain ideas or perspectives from a broader debate. That danger is all the greater if the ideas or perspectives are ones a particular audience might think offensive.”

The “heckler’s veto”: The left’s default reaction to conservative views

Evers, Taylor, and Castro’s sentiments reflect a mindset prevalent among the liberal left today; that preventing another person from exercising a disfavored viewpoint is somehow exercising, rather than infringing on, the concept of free speech. Such backward sentiments have been shockingly evident across the nation’s campuses. Mobs of students have disrupted events at college campuses across the country; at Rutgers University, University of California – Berkeley, New York University, the University of Miami College, Florida Atlantic University, Villanova University and DePaul University.

In several incidents, the disruptions escalated to real violence, with student “protestors” setting fires, breaking windows, and destroying school property. In more than a few incidents, the violence and threats were tolerated or even encouraged by supportive liberal faculty and staff.

In May, University of California – Fresno professor Gregory Thatcher dismissed his class and instructed them to destroy pro-life messages being chalked on the sidewalk by a student group who had obtained permission from the university to write their messages. Thatcher is now being sued by the students for violating their free speech rights.

Syracuse University professor Dana Cloud, a self-proclaimed socialist, made headlines in June after she tweeted for her supporters to join a mob of ANTIFA thugs, and help “finish off” a conservative group who had obtained a permit to march for their cause. Cloud has since claimed her abject call for violence was simply taken out of context.

While there have been exceptions, the attacks on free speech at colleges across the nation have been instigated largely by liberal Democrat students and faculty, who believe they have the right to silence conservative views they oppose through violence, intimidation, or disruptive behavior.

It is perhaps no surprise then, that Wisconsin State public schools Superintendent, Tony Evers, a Democrat, would oppose The University of Wisconsin Board of Regent’s policy designed to curb such anti-social (and anti-American) behavior.

What is surprising, perhaps, is why Mr. Evers, who apparently supports the infringement of free speech on college campuses, holds the position of Wisconsin State public school Superintendent.