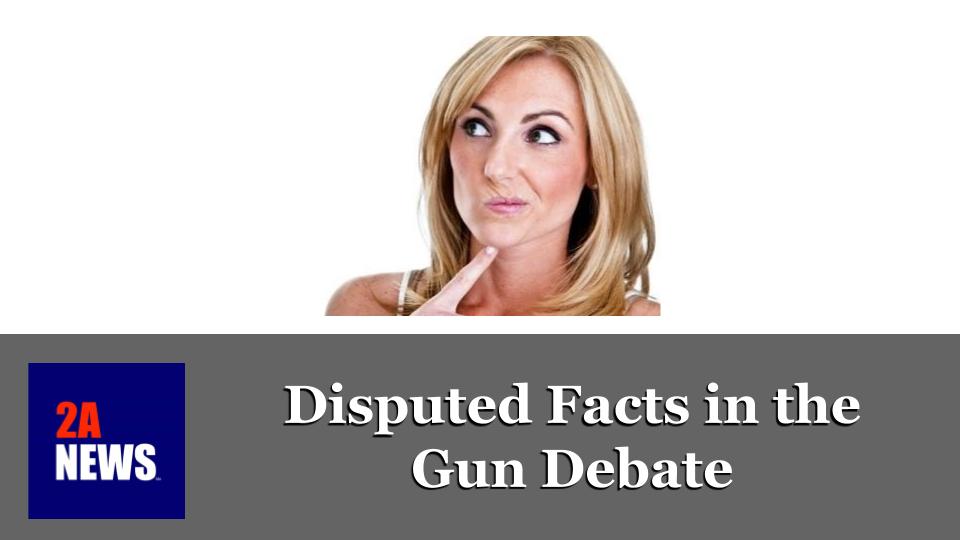 Disputed Facts in the Gun Debate

The gun debate is difficult for many reasons. It is often an emotional issue. To make things even more difficult, there isn’t one gun debate, but perhaps dozens of “gun debates.” Even the questions that seem simple are difficult to answer well.

A simple answer is easy to find.. and often wrong. There are questions hidden within questions as we look for the truth.

Is the US violent because of civilian gun ownership?

For some people, the gun issue is one of appearance. Many legal residents own guns here in the USA. We also see lots of news coverage when innocent people are shot. We don’t read about the violence in other countries, so we assume that other countries are peaceful. We put these facts together and conclude that guns cause violent crime here in the USA.

The stereotype of gun owners is a rural farmer, but it is our failed inner cities where we see the most violence. Bad governance causes violent crime, not guns.

Are guns too easy to get?

You might think it is easy to buy a gun if you’ve never done so. There are 23 thousand firearms regulations. Most of these restrictions have no effect on violent crime. The reason is that 99 percent of criminals get their firearms illegally. Passing another gun law doesn’t change the behavior of criminals, and criminals are the ones who commit violent crime.

If you think it is easy for an honest citizen to buy a gun, then I encourage you to try and buy one in California or New Jersey. Criminals don’t have to wait for a 10 day waiting period or a one-gun-a month delay. It can take you months to buy a gun legally, while a criminal gets a new gun in an hour on the street. Gun laws don’t stop criminal behavior.

Does a firearm in your home put you at greater risk, or does it make you safer?

It turns out that criminals behave toward us the same way they behave toward the police. Like us, the police will touch their firearm dozens of times yet never have to press the trigger as they face a violent encounter. The policeman thinks things would have gone very differently if he were unarmed. Likewise, criminals behave differently when they have unarmed victims.

Many homeowners don’t report that they had a gun in their hand when the criminal ran away. Most law enforcement agencies don’t keep statistics on civilian self-defense. That means it is hard to get solid data when guns save lives.

We also have dirty data when it comes to firearms accidents. Did a child find an improperly stored firearm and hurt someone? We want to keep our guns away from our children and unauthorized strangers.

Unfortunately, we get confusing reports after an accident involving a firearm. Was the gun improperly stored by the legal gun owner, or was the gun stuffed under the couch cushions by a criminal who was visiting his girlfriend for the night? Did children find the gang’s gun that was hidden under the front steps? Was the unauthorized person who got the gun your 4 year old who found it in the dresser drawer, or a 19 year old burglar who smashed his way into your house and used a pry bar to open your lock box? The data is often confusing since both are described as negligent discharge of a firearm by an unauthorized minor. We don’t want to lump these events together since the cure for each is dramatically different.

How often do ordinary citizens defend themselves with a firearm?

From the best data that I can find, self-defense is rare and accidental injuries with a legally owned firearm are extremely rare. Most “injuries” with a firearm are suicide by middle-age white men. For perspective, about one-out-of-5-million children will find and misuse an improperly stored firearm this year. About one-out-of-200 of us will use a firearm to legally defend ourselves or another innocent party. That means your legally owned gun makes you safer. With a little education, some training, and safe storage, your gun makes you much safer.

I wish I had short and simple answers to the gun debate. I chose to give you the best truth I have even though it took a little longer.

A Second Look at a Controversial Study About Defensive Gun Use