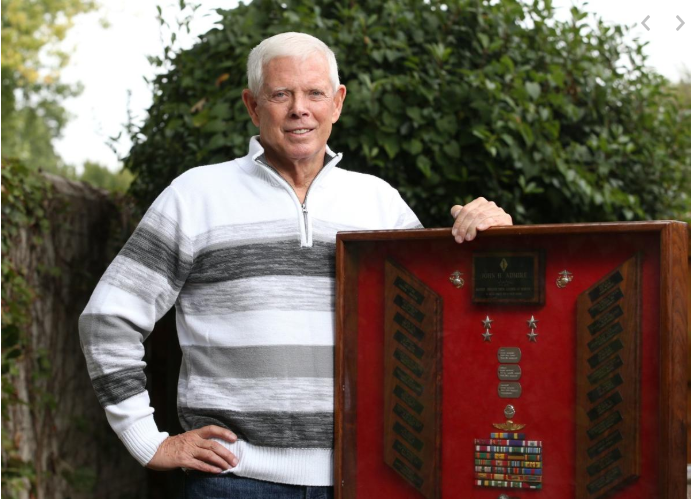 We’ve heard the various stories of miscreants who have never done much with their lives, and never served, but in the interests of getting a little attention, find a uniform, some patches and other insignia, and parade around public places.  “Stolen valor” is offensive to those of us who value the sacrifice our military men and women offer day in, day out.  And it should be an affront to anyone who treasures personal integrity.

Slightly less despicable are those who have served, but think their status as veterans lends them some degree of authority on giving up our rights.  And every so often, gun control groups will trot out a few of these in the hopes of wowing some of us into jumping on the prohibitionist bandwagon.  “We know you like military guys, so here’s some we think you really need to listen to!”

Except, the ones they usually parade in front of us are less than impressive for the issue they’re advocating for.

Exempli Gratia, take Retired USAF Lt. Colonel Neil Hester, who is a founding member of Everytown’s Veterans Advisory Council.  He served our country for 28 years.  He says so in the email Everytown sent out this Veterans’ Day.

Firstly, he’s Air Force, whose role isn’t exactly dealing up-close-and-personal with enemies on the battlefield.  In what capacity did he serve?  He doesn’t say–nothing about having seen combat (I also personally know a currently-active LTC in the USAF–his specialty is health care administration).  Think he got much trigger time past Basic?  I seriously doubt it, especially noting his rank at retirement.  This guy screams “POG” or “REMF.”

This past summer, two veterans-turned-Democrat-swamp-dwellers wrote an op-ed for USA Today, clamoring for the end of civilian ownership of “assault weapons” (among other things).  One of them was one of the Navy’s first combat-trained women pilots, and flew missions in a theater of combat in the early 2000s, but not combat missions.  She piloted supply flights for a utility squadron.  Again, this spells out POG.  I highly doubt she is as “intimately familiar” with infantry small arms as her op-ed claims.

Her co-author, however, is a different story.  He’s former U.S. Army, retired at the rank of Captain, saw three tours in Afghanistan and Iraq with the Army Rangers, during which he was awarded a Bronze Star.  I would definitely take his experience with small arms more seriously than two non-combat aviators.

That is, up until he describes an AR-15 as “military grade,” and mischaracterized it as being “used in more mass shootings than any other.”  You’d think a grunt officer (which, I’m told, becomes more of an oxymoron the further you go past Captain) would understand the consequences of bad intel, unless you’re deliberately dispersing it to fool an enemy into doing something you want them to do.

A few years ago I was once chided by an online gun-control-happy Army veteran who had seen combat as a medic, and challenged my knowledge of tactics when I merely opined how open carry was a poorer tactical choice than concealed carry.

As the conversation went onto other related topics, I couldn’t help but notice him entertaining the mindset that I’ve seen most anti-gun combat veterans fall into:  mistakenly believing that policies serving an invading force’s interests in controlling hostile territory in a theater of war are somehow appropriate to one’s own civilian population at home during peacetime.

While I respected his service, I noticed he only served for a few years, and since then, had gotten into selling insurance after mustering out.  While he has been keeping his medical skills sharp by serving as a paramedic or EMT with his local rescue squad, I don’t think he’s done much towards maintaining his skills with weapons; which you would generally expect from someone who thinks gun ownership should be discouraged.  You’re not going to nurture something if you don’t see the point of it, after all.

In contrast, I had been a gun owner and CCW practitioner since before he entered service, and have been one long after he got out of the Army.  In fact, I have more years as a CCW practitioner than both aforementioned veterans-turned-Democrat lawmakers combined.  While it doesn’t mean I’m a John Wick by any stretch of the imagination, and nowhere near a Massad Ayoob, I do maintain my skills with regular range time and training, keep myself up to date on the pertinent laws of the state I live in and the states I visit.  Plus, make the daily decisions of a CCW practitioner that those who don’t carry really don’t bother to consider.

And that gives me, and those like me, something of an advantage over those whose experience with, and interest in guns, largely stopped the same day they stopped wearing the uniform.

Hats off to those who remember their oaths, though.  And thank you for your service.